This particular battle showcases ranged combat.  Meltdown is a Devastator, which means his primary powers do ranged damage – in his case, fire damage.  His secondary powers are from the Restorative Nanites powerset.  Meltdown is half human and half Orensan, an alien species which is generally allied with humanity.  He is also a member of the Justice Corps, the elite heroes who work with ship security to maintain order aboard the F. H. S Justice.

The Nagdellians are a hostile alien species that does not tolerate competing life forms.  With a rigid caste system, short lifespan, and much lower level of individuality, the Nagdellians see themselves more as body parts of a singular empire than as individuals.  Wherever they appear, they are always enemies of humanity. 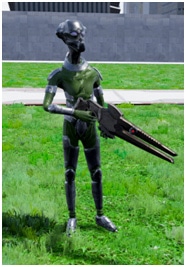 In the video, Meltdown uses six powers: a self-buff for damage, a ranged location AOE power, a ranged targeted AOE power; a strong single target attack; a short range cone attack, and a short-range AOE buff for health regeneration. The three Nagdellian soldiers and the Lieutenant each have two ranged powers. The Lieutenant also has a long-recharge power to call for reinforcements, which are teleported to his location. XP and loot are disabled for the moment.

Coding the enemy AI is an ongoing process. So far the enemies respond to threats, move into attack range, employ multiple attacks, call for reinforcements, and change position to improve their attacks. They track total damage done by and to an enemy and account for healing done as well. They have line of sight, so heroes can sneak up on them. If they see an ally in trouble or chasing, they join their ally – and we’re working on having them heal each other. Enemies can also patrol an area, defend a chokepoint, break off an attack if the target gets too far away, and follow targets out of their patrol area before returning. We are currently coding many additional attack powers, and some other abilities. For example, there will be both random and non-random changes to the preferred order of attacks, so enemies will react differently in similar combat situations, using a mix of melee and ranged attacks.