Two years ago, we launched the Ship of Heroes website and announced that we were using the closed MMORPG as a major inspiration for a completely new game.  CoH had many wonderful traits, one of which was how much fun you could have playing healers, buffers, controllers, and other non-DPS archetypes. 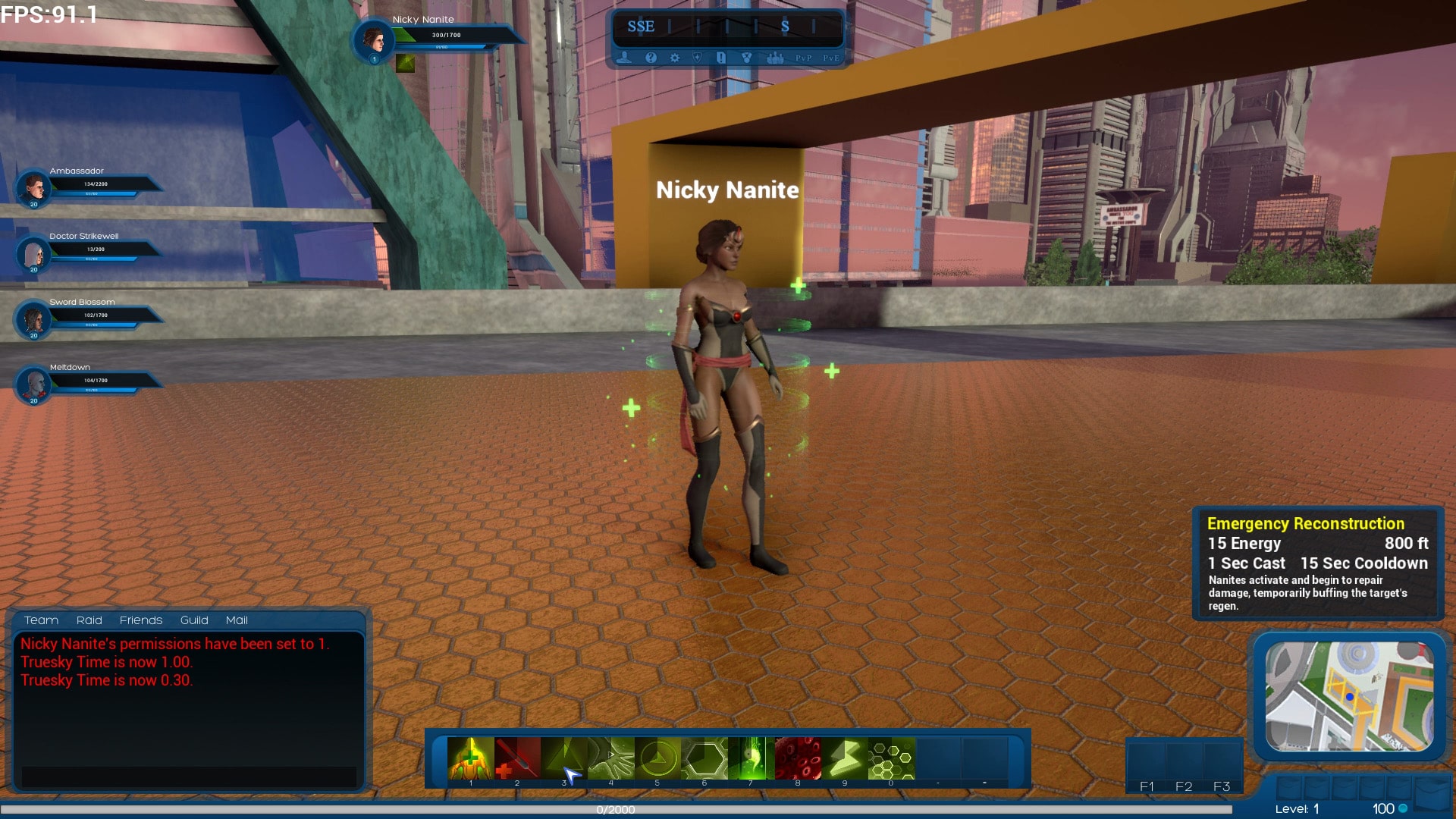 Restorative Nanites is the eighth full powerset we’ve shown so far, and the first one we’ve made entirely with the PopcornFX technology. Since it’s a healing and buffing powerset, there are no enemies being defeated, and the visual FX should not be as dramatic as they would for an offensive powerset, but they still need to look good. We’ll let all of you decide how close to the mark we’ve come. This is also the first powerset that we’ve shown aboard the FHS Justice, with our new day/night cycle lighting in place. 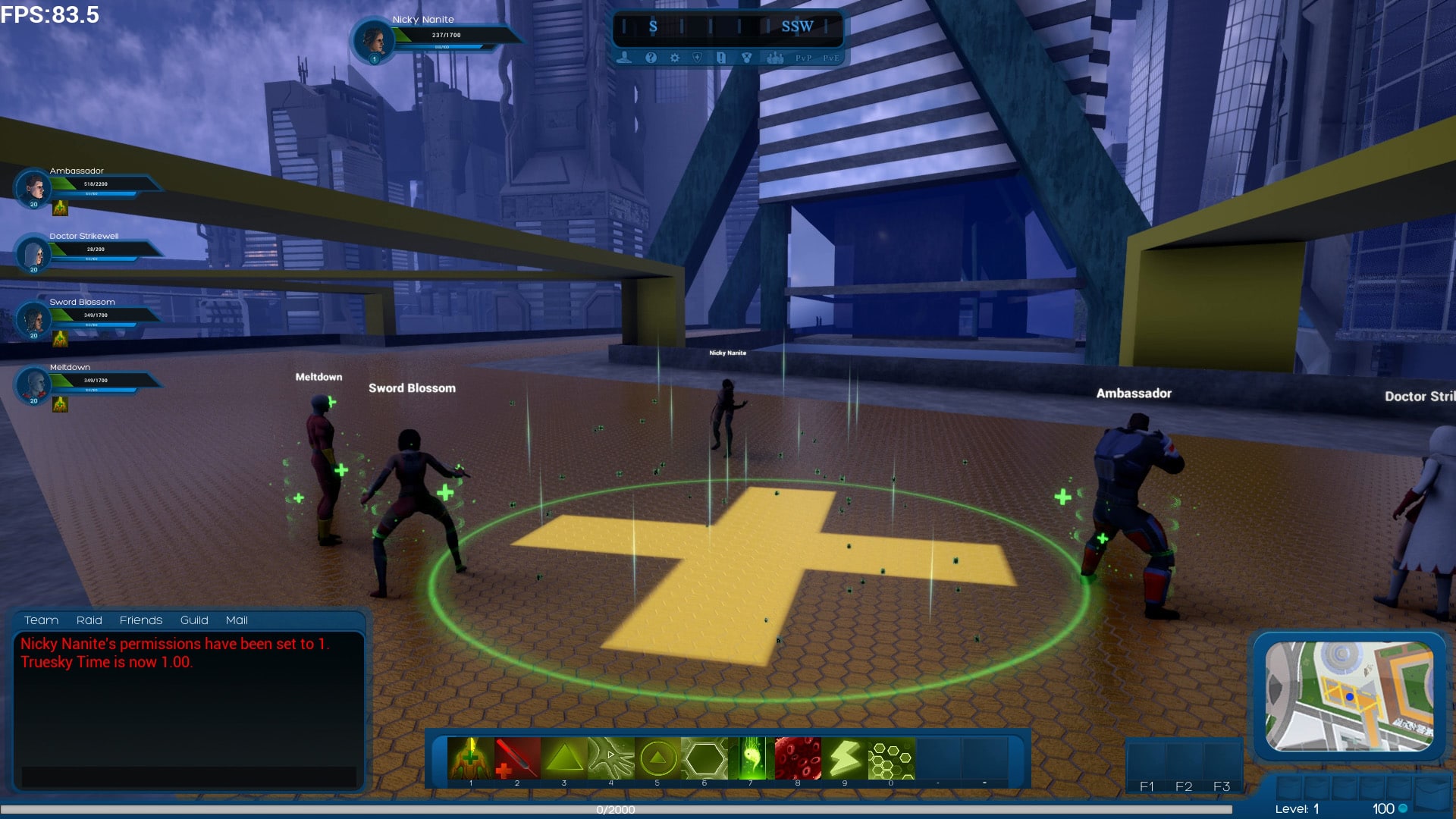 The FX of the powerset adapts to the level of light.

Restorative Nanites is a primary powerset for Support characters, and a secondary for Devastators. It has a mix of healing and buffing powers, and is particularly well-suited to team players, since quite a few of the powers are AoEs. 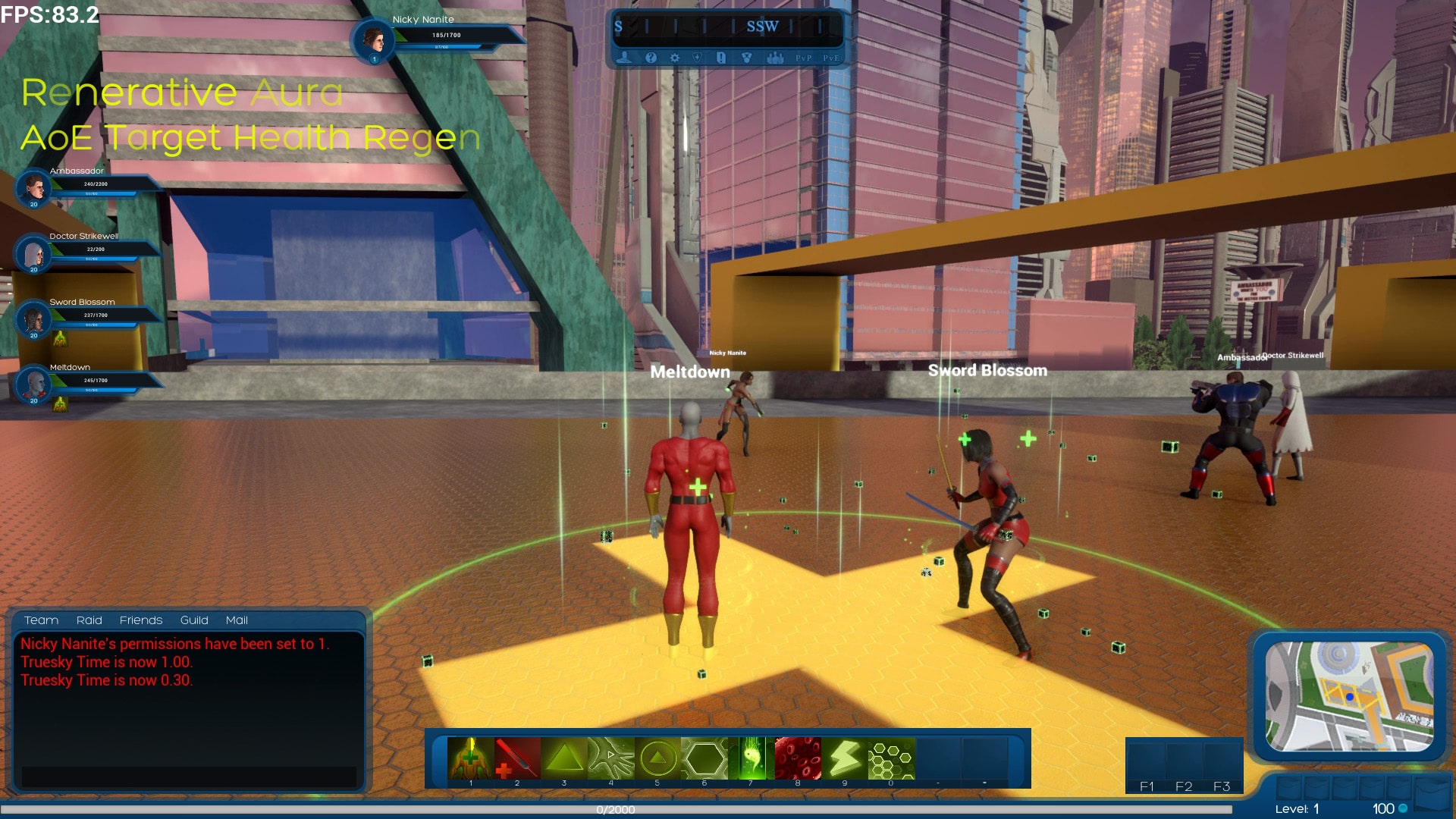 This video also marks the first time we’ve shown a powerset that is likely to appear as a secondary, rather than a primary, for damage-dealers.  Powersets of this kind are a critical piece of the strategy behind building a unique character in Ship of Heroes.  The game is not just about collecting and enhancing an attack chain that maximizes DPS.  Buffing and healing will be critical for victory against the tougher opponents. 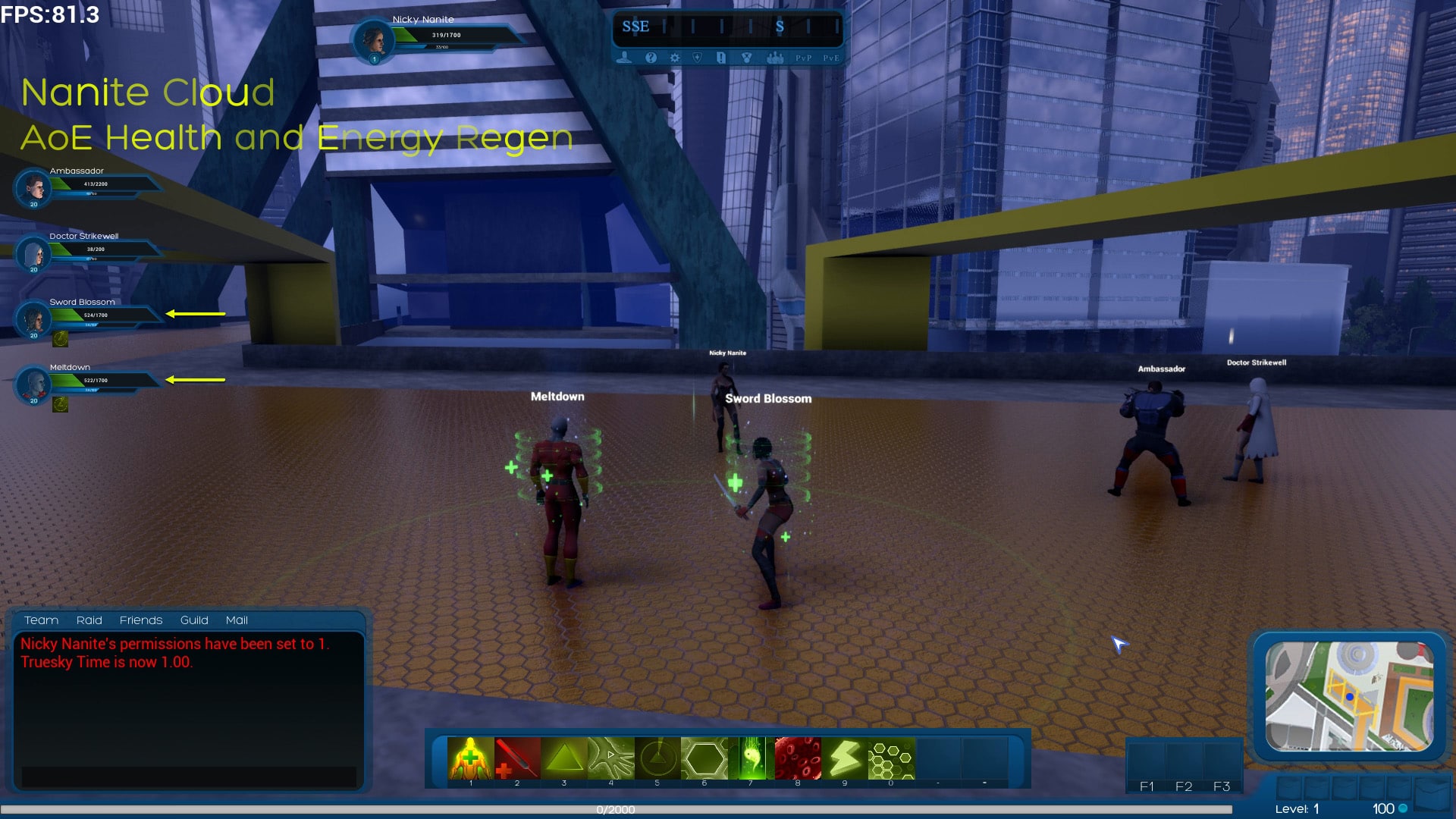 Nanite Cloud is a long-recharge team buff enhancing both health and energy recovery.

Five of the ten possible powers in Restorative Nanites are AoEs, making this a powerful set for teaming, though it also works for solo play.  These powers buff health regen, energy regen, recharge time, and damage, and remove debuffs.  Two additional single-target debuff removal powers are also included, along with single-target health regen, energy regen, and recharge time buffs.  This is a valuable powerset, even if your teammates do not need healing.  Most players will select a subset of the powers, making tradeoffs for other powers, so we are providing maximum flexibility for players to customize their characters.

One new feature for all powerset FX in Ship of Heroes is that we have now connected the intensity of the FX with day/night cycle.  This particular powerset video was recorded using late afternoon lighting, but since the Justice has a day/night cycle, the FX needs to be adjustable as well.  This helps us avoid having mild daytime FX but super-intense nighttime FX, which some games produce.  It also means we can refine the FX intensity in the future, as we show various powersets in multiple lighting scenarios.

As you think about the future of MMORPGs, please think about what makes a great player experience.  We think you’ll conclude, as we have, that complex support characters add a lot to the fun of playing any MMO.  And take a moment to think about COH – gone but not forgotten. 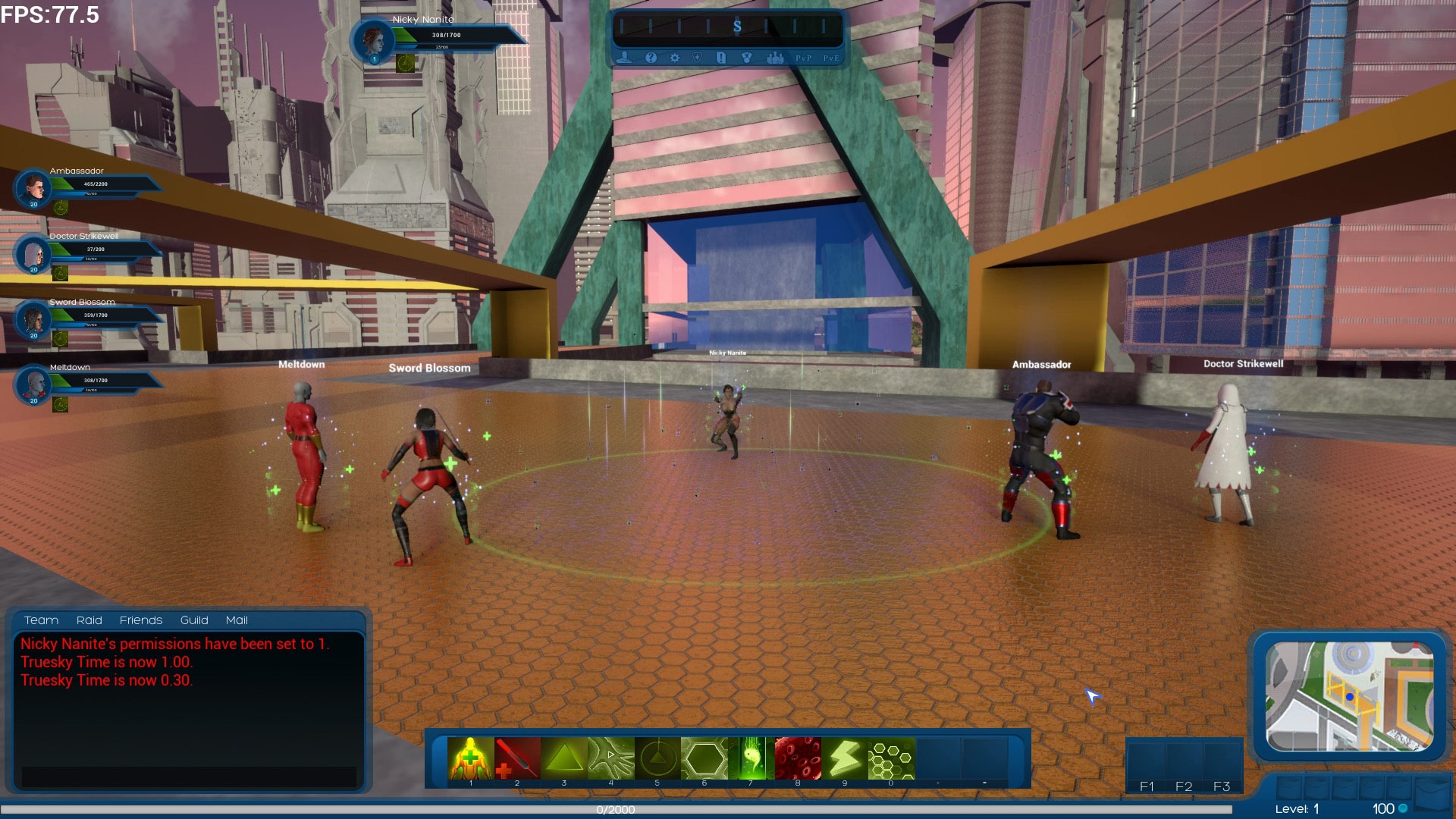 The whole team being buffed by one cast of Nanite Cloud.

All of the FX, SFX, and animations shown in this video are works in progress, and we are specifically planning to continuously upgrade them as the game evolves.  In particular, this is our first set of powers developed exclusively with PopcornFX technology, and we would like to thank the guys from Popcorn for their help and advice with the development of this powerset.

All of the numbers and stat effects, like an increase in damage from 75 to 113, should be taken as illustrative; major rebalancing will occur later on.

This video shows the current state of our eighth full powerset, in an executable gameplay situation that demonstrates what a player would experience today with the current version of Ship of Heroes.  We’ve previously shown six offensive sets, plus the bulk of the Mystic Healing set, which was showcased in our combat Alpha videos.  We’ve also shown additional partial powersets in other SoH videos.

The idea behind Restorative Nanites is that in the future, there is a class of tiny machines called Nanites that are specifically designed to correct problems – healing, strengthening, and generally restoring people or objects to their best possible state.  While the Nanites are too small to be seen, the energies and processes they employ often create transient energy fields or other visual effects while they work.

This video was created in a packaged client/server configuration of Ship of Heroes, and not in the editor, as both technical bugs and performance are different in packaged version compared to the engine editor.

As a buffing and healing powerset, Restorative Nanites would be paired with an offensive powerset in actual player builds.  Buffing and healing can have an enormous impact on both DPS and survivability, and we are breaking from the common practice and showcasing the powerset by itself. 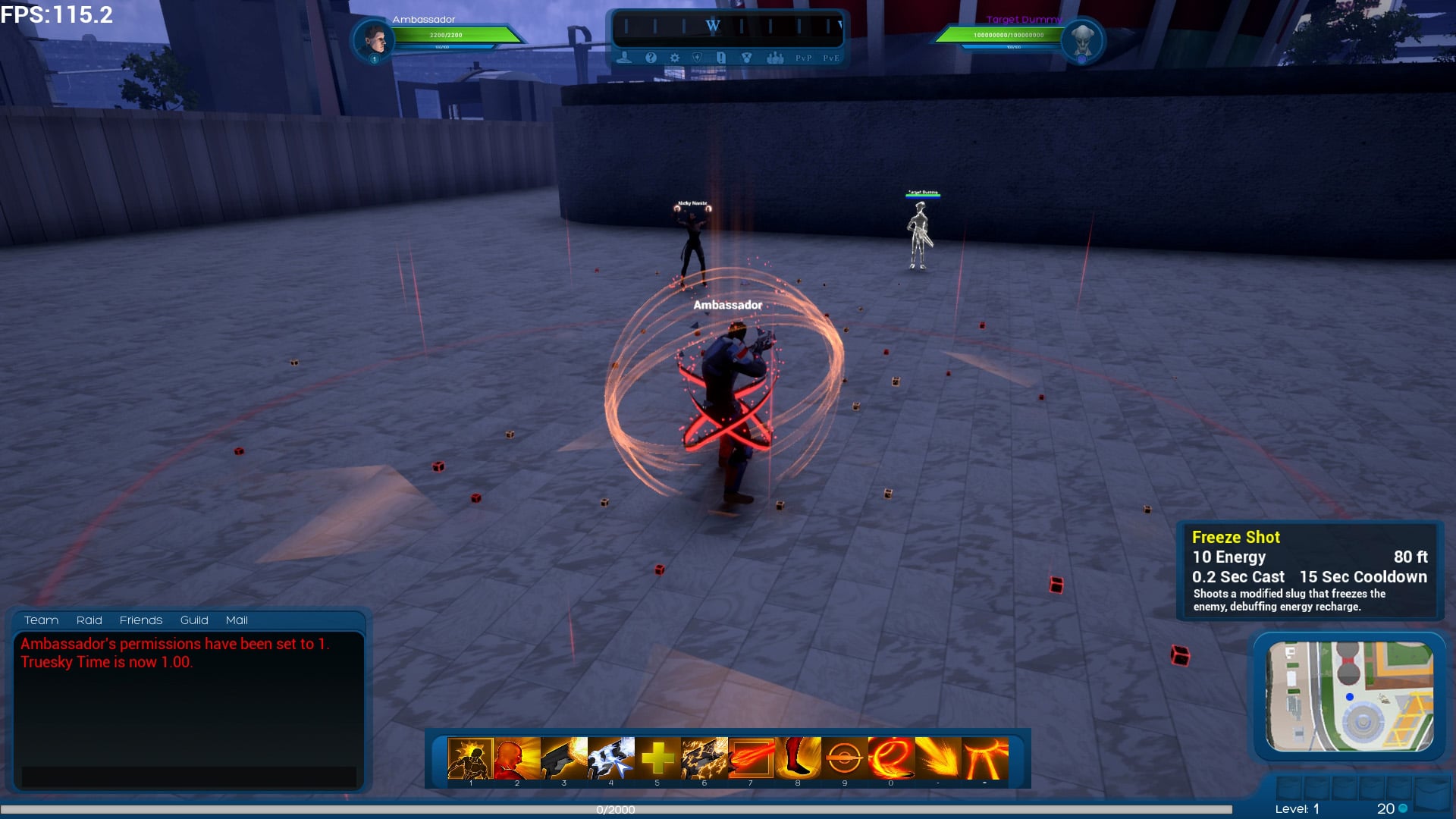 Ambassador’s damage is buffed by Nicky.

Nicky Nanite is demonstrating the new powers and is also showing one version of a new female costume that has been added to the game. Note that for the purposes of this video we often are showing our heroes in a state of near-death or energy exhaustion so that the effect of the powers can be very visible.

This video was recorded in Apotheosis City, which has experienced a number of recent upgrades, including the addition of a day/night cycle.  We have coded the FX for powers to respond to the time of day, becoming more visible in the full daylight, and less overpowering at night.  This feature is in use during the video, which was filmed in the afternoon daylight, in the Heroic Plaza area in the north quadrant of Apotheosis City.

Viewers will notice that we have continued our practice from the Halloween video of placing a real-time Unreal Engine FPS counter in the upper left of the UI.  Now all of you see what we see in terms of FPS, during our development work.

Our plan is to continue to develop powersets for Ship of Heroes, with an emphasis on melee and on secondary resistance and defense sets, since we’ve released fewer of those so far.  We also plan to add at least one controller set during the first half of 2019. 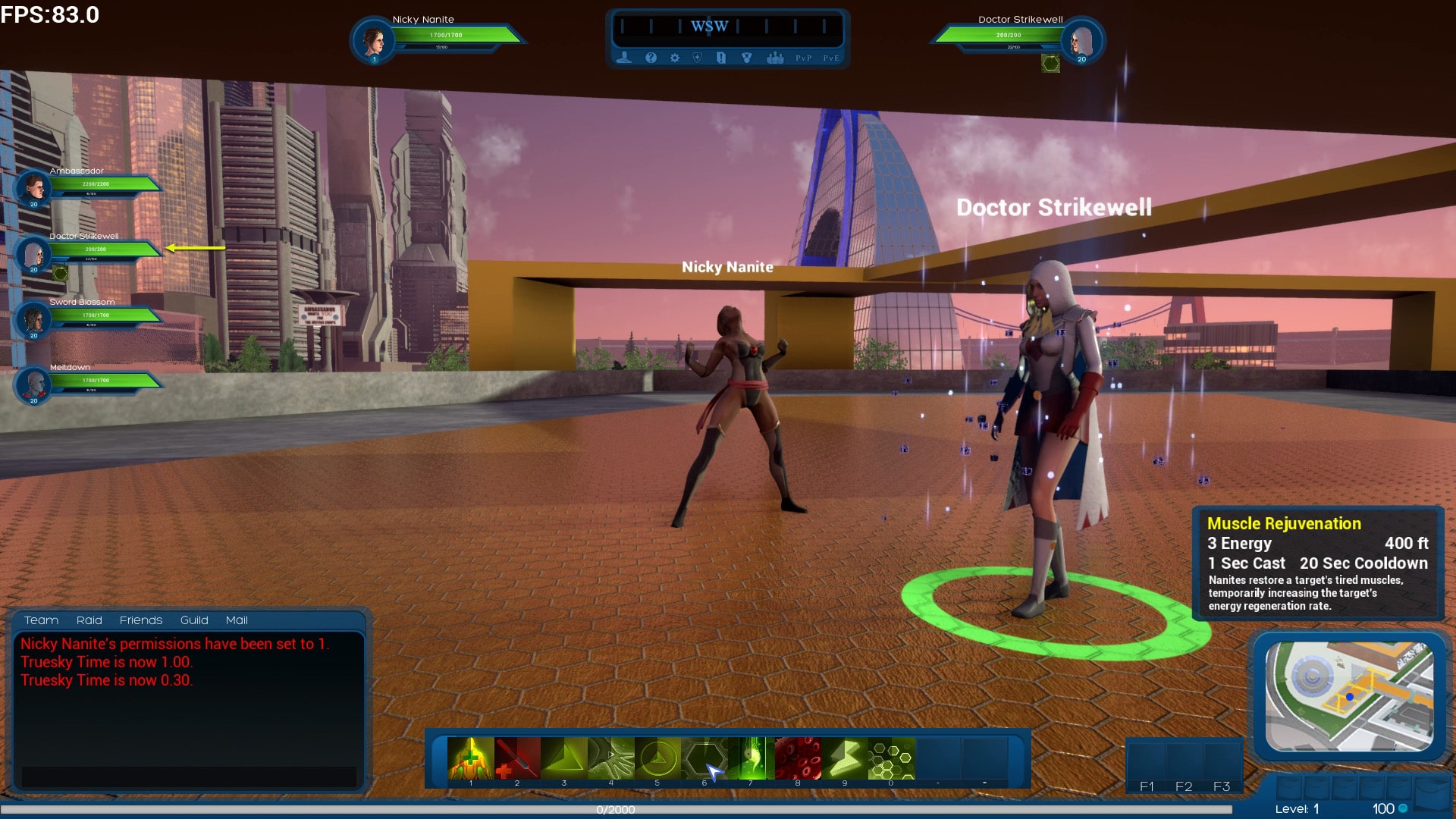