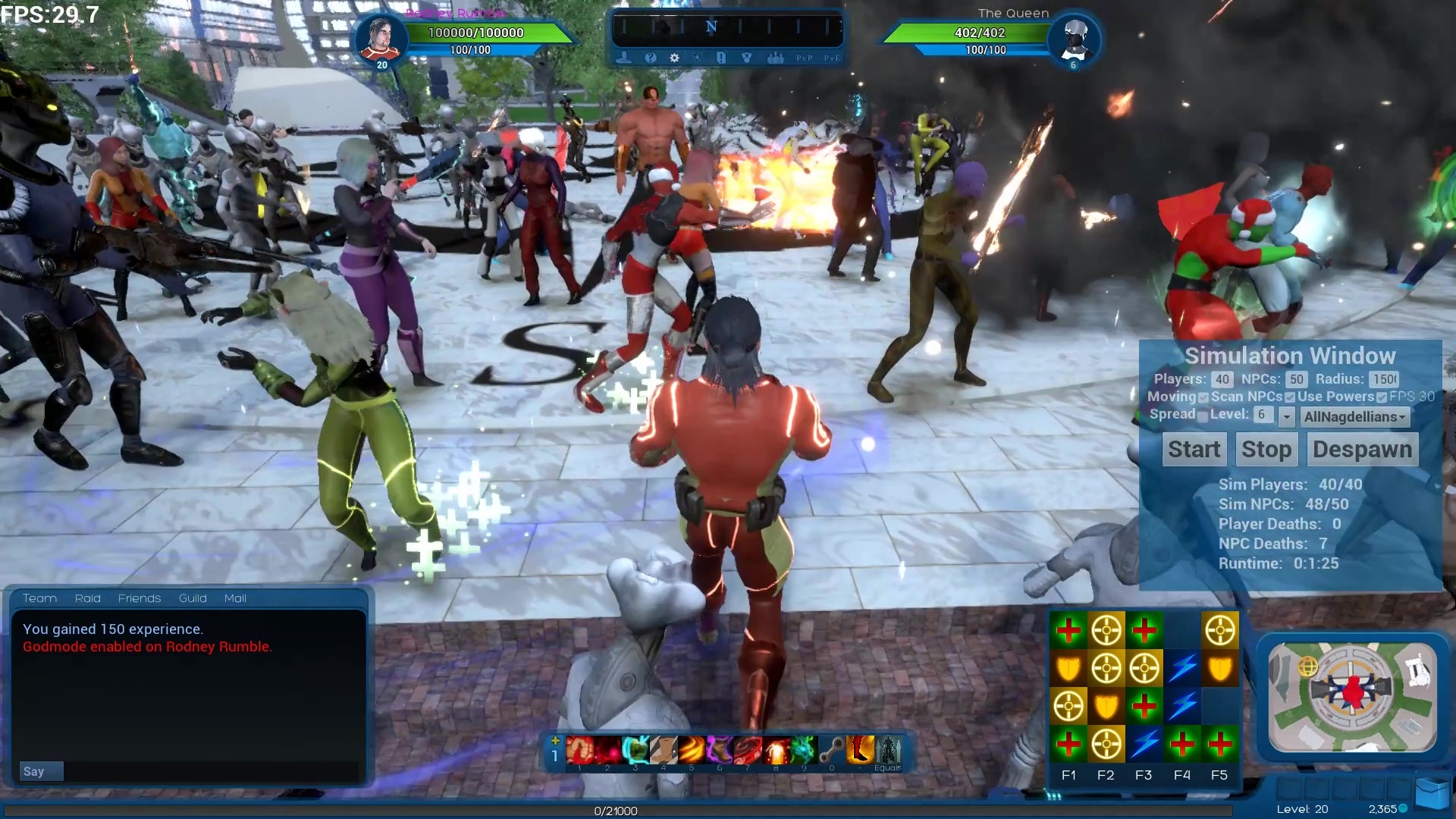 “This one isn’t an invasion. It’s just a street party that got a little out of hand.”

With this newsletter, our Invasion Beta Event has officially ended for now. Over the three runs, we observed that Devastators were overwhelmingly the most popular character archetypes for the event (Tankers were second), and that the community has a preference for us to make the fight more structured and less chaotic. So we are working on that, as you see in the list below.

We had fundamental successes during the event. FPS was surprising good given how many people came, and our changes to the animation budget for the enemies worked out well. Setting animation budgets is one of the trickiest parts of making an MMO with big battles. Finally, we are very pleased to see that we have the same kind of happy, positive playerbase as CoH had. That makes all of this testing much more fun!

This is the list of what we’re working on fixing so far:

1. There appears to be a server memory leak that was causing FPS to slowly decrease over time until we restarted the servers. It may also be the cause of what we’re calling “death lag”. 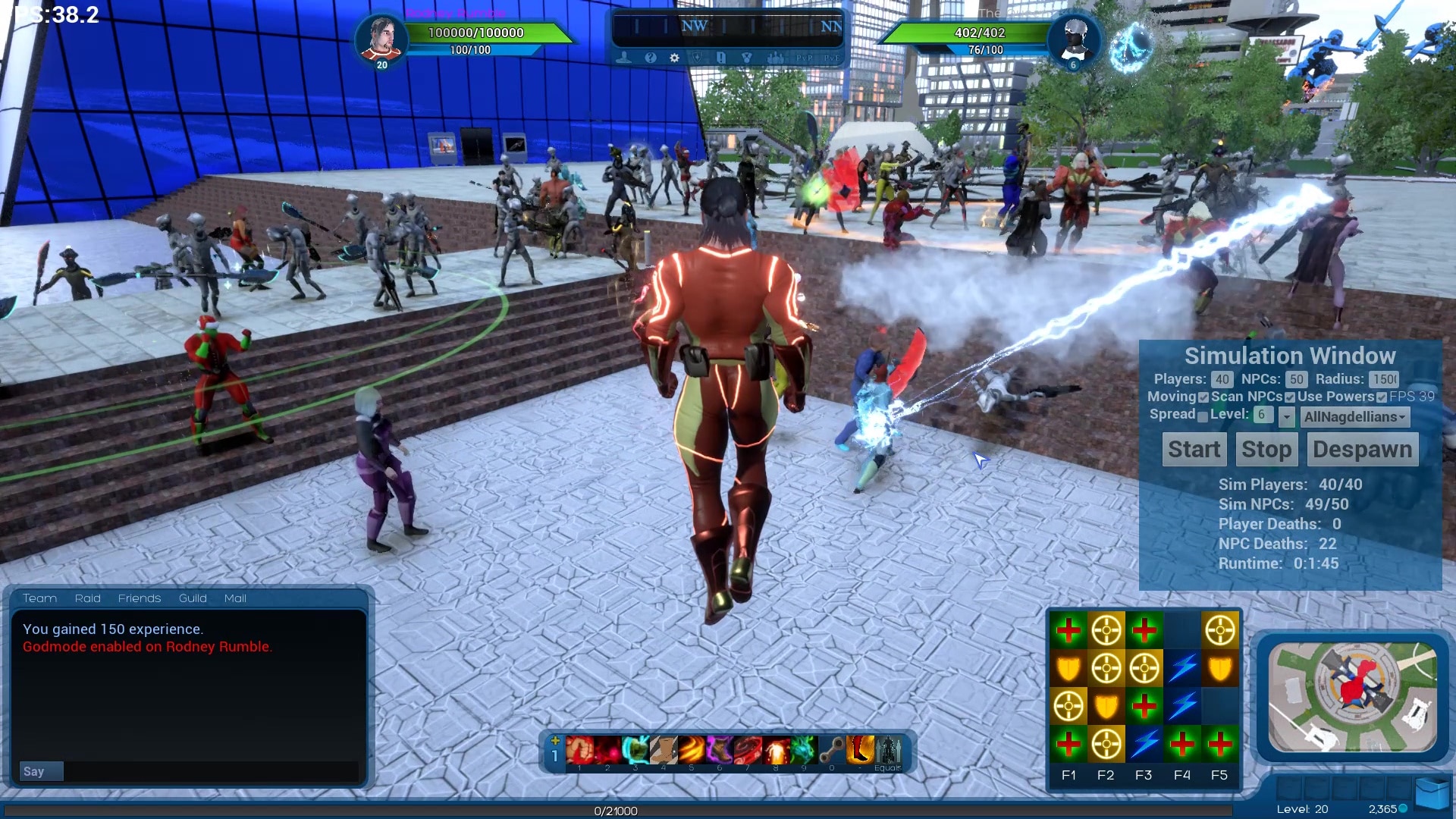 Death lag is a new and interesting concept which we had not encountered before now. Ah, the joys of Betas.

2. There were issues with the chat servers, causing conversational delays. 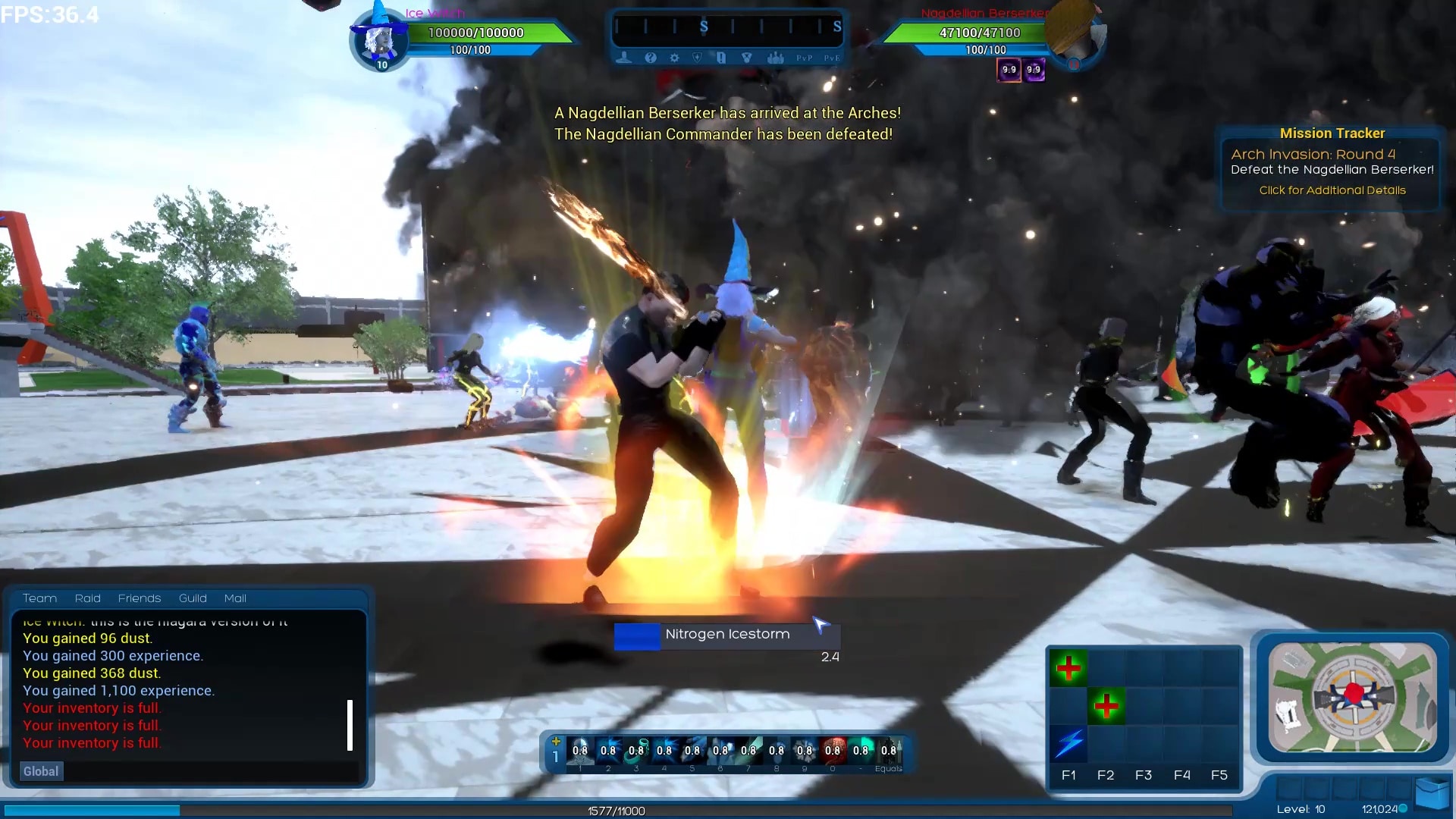 3. After feedback from all of you, we will experiment with having the Nagdellians fight in teams, just like players might. That will take some work, but we think it will make the fight less chaotic and more fun. 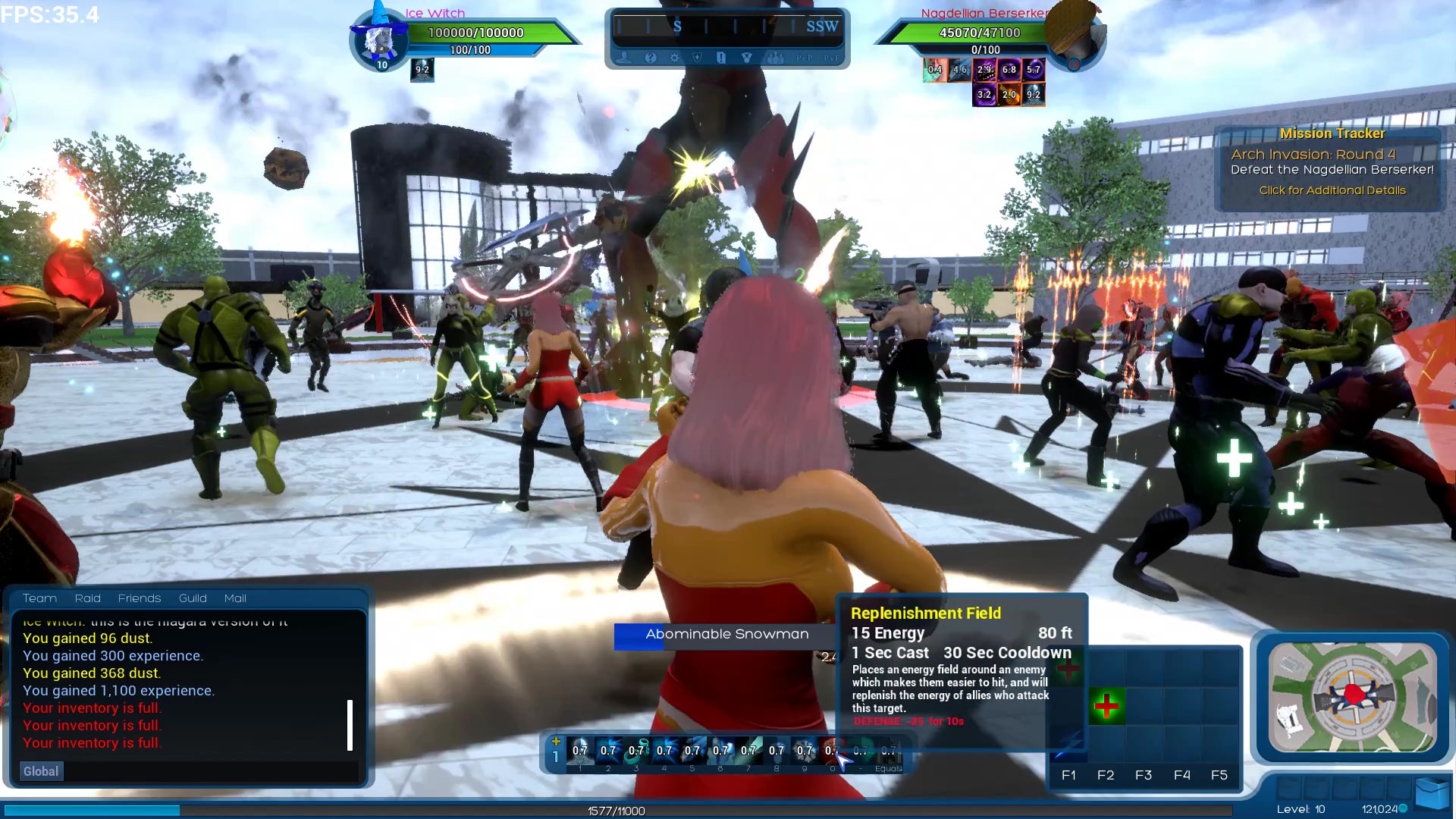 “Another hero with my outfit? One of us needs to go home and change…”

4. Our teaming UI needs to be improved to make sure messages no longer go awry. We also want to make it easier to heal and buff teammate through their picture icons on the screen. 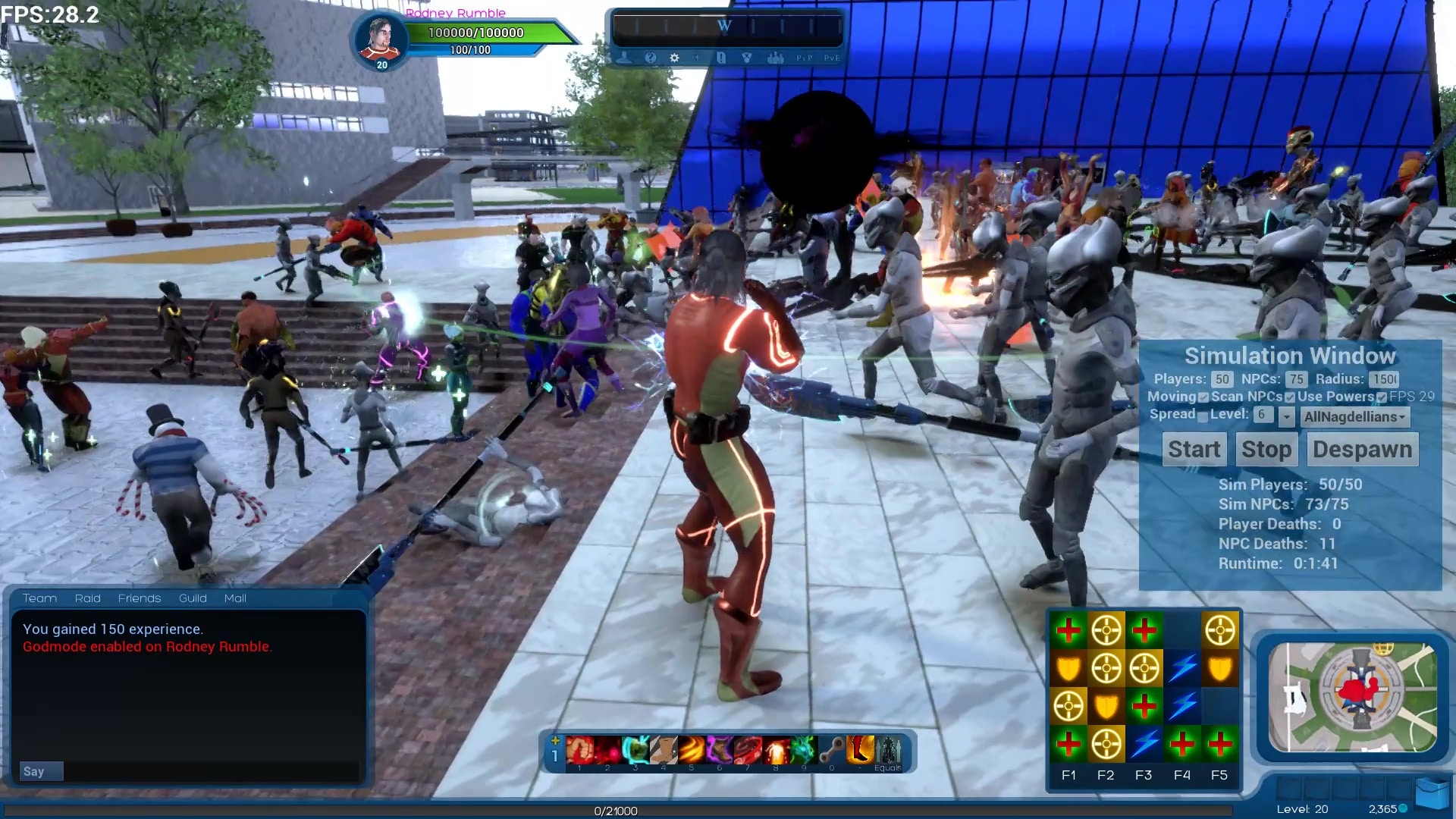 That is way too many Nagdellians. Time to use the ultimate defense power.

5. We noticed that after going to the hospital and then running back to under the Arch, it was taking too long to reload enemies. Invisible Nagdellians are not the goal – at least, not in this particular event – so we will be looking into improving their spawn-in loading times. 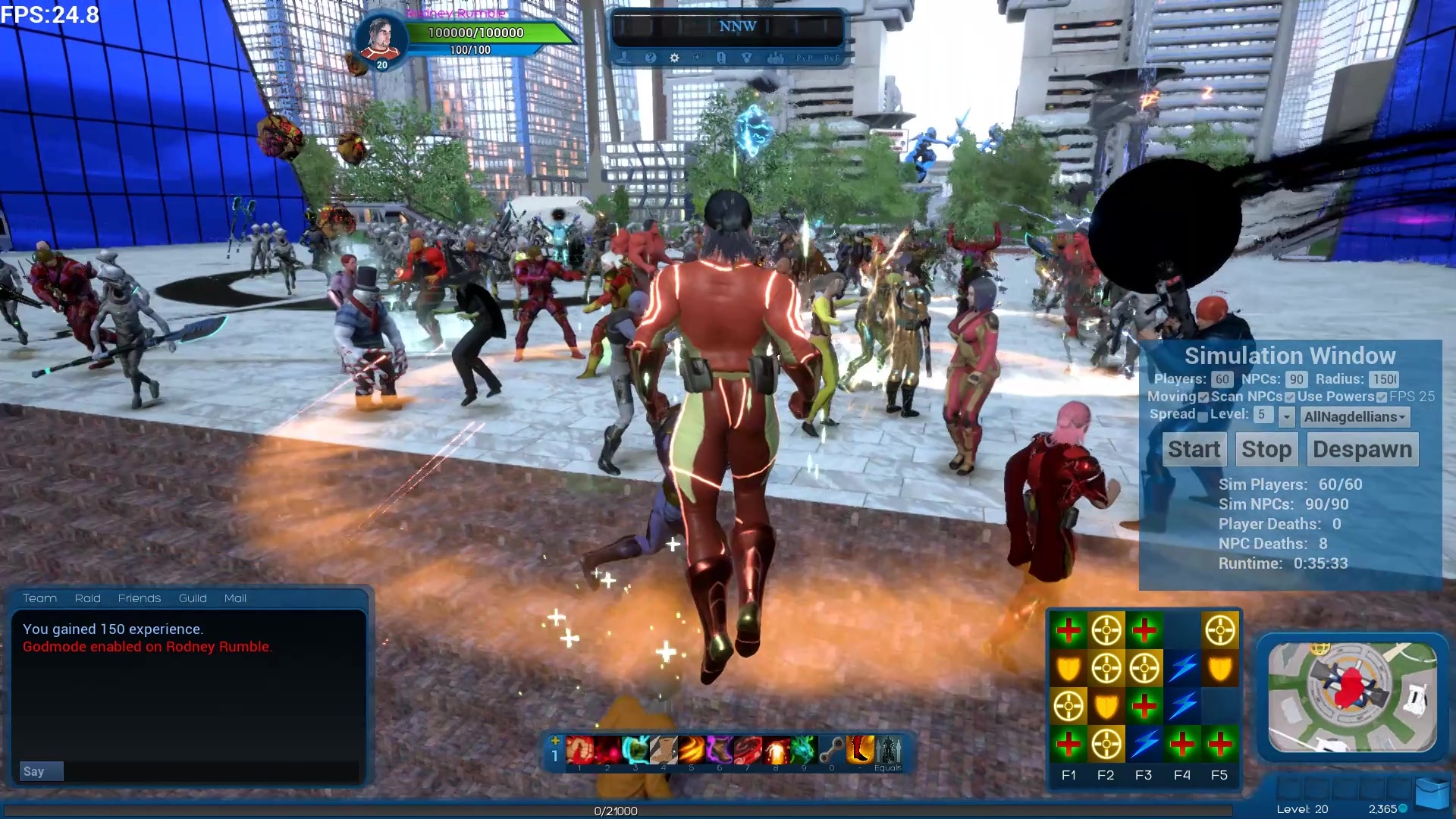 We will return with the new and improved invasion Beta event 2.0, hopefully sometime in the next 4-6 weeks, so be on the lookout! In the meantime, we plan to explain some of the details of the SoH mission creation tools and processes’ we hope you will find that enjoyable. 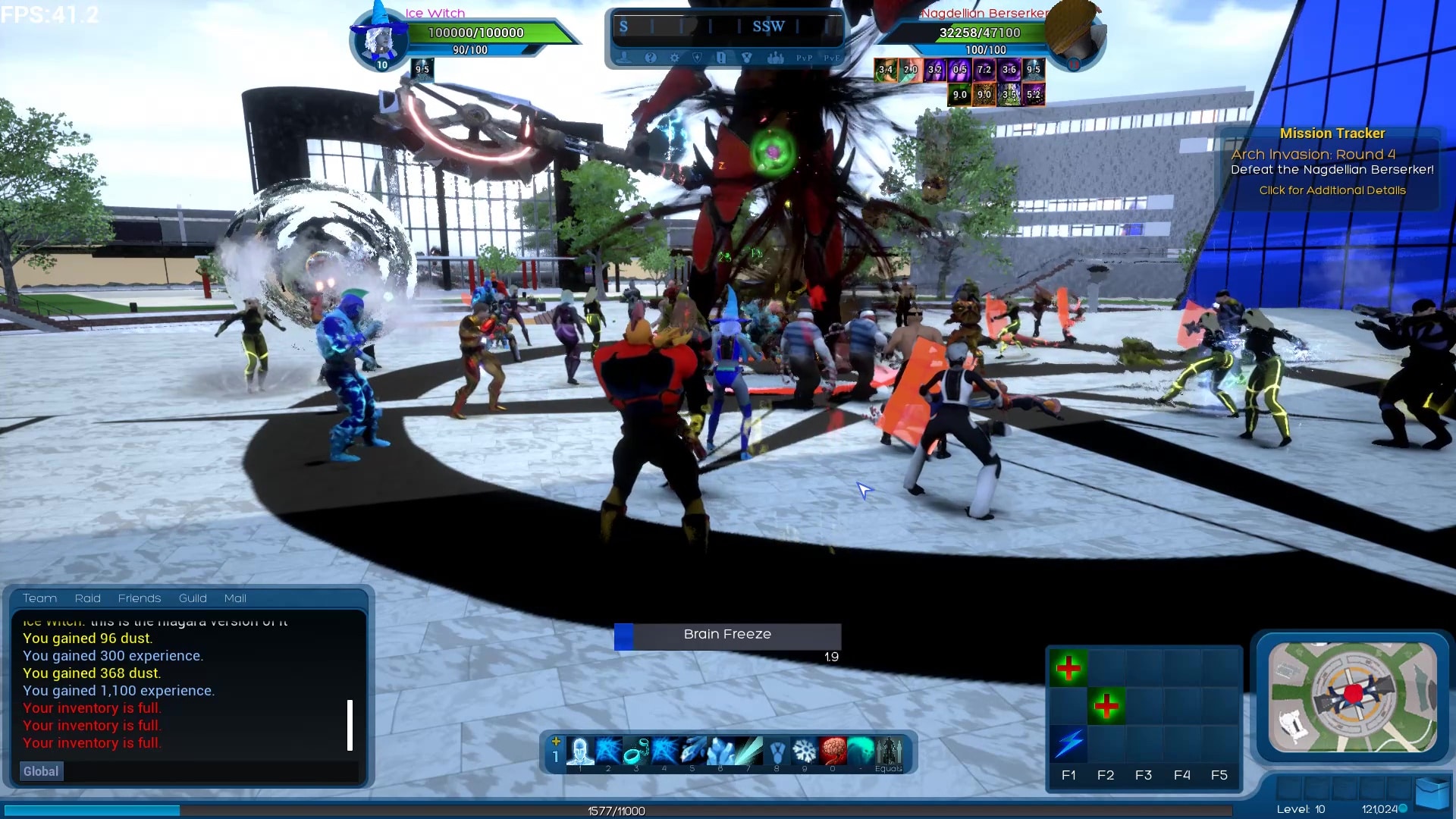 Things are moving quickly, and we will be soliciting more and more of your opinions and preferences in the weeks and months to come. There are also some new polls up on the website. Let us know what you think about invasion, our planned mission content, and the game on the SoH forums!

This event was run on our new hi-intensity server, located in the Seattle area. Players from all over the world were logged in.

We were able to test over 30 heroes on the screen and many more Nagdellians in multiple runs over three Saturday mornings. Often with 100 characters on the screen in the busiest fights. We have great FPS, but some lagging on information transfer, which we are investigating.

This event showed one of several raids and large-scale combat events we plan to have in SoH. Live-testing with players from all over the world is a key element of our pre-launch process.

For those who were wondering, the sliding corpse effect was caused by a server memory leak. It happened to Consultant too, and it is kind of hilarious.

Fighting in a big crowd like this really makes Apotheosis City feel alive.