In this video three devs and nine players responded to the call to test the riot code for the first time. 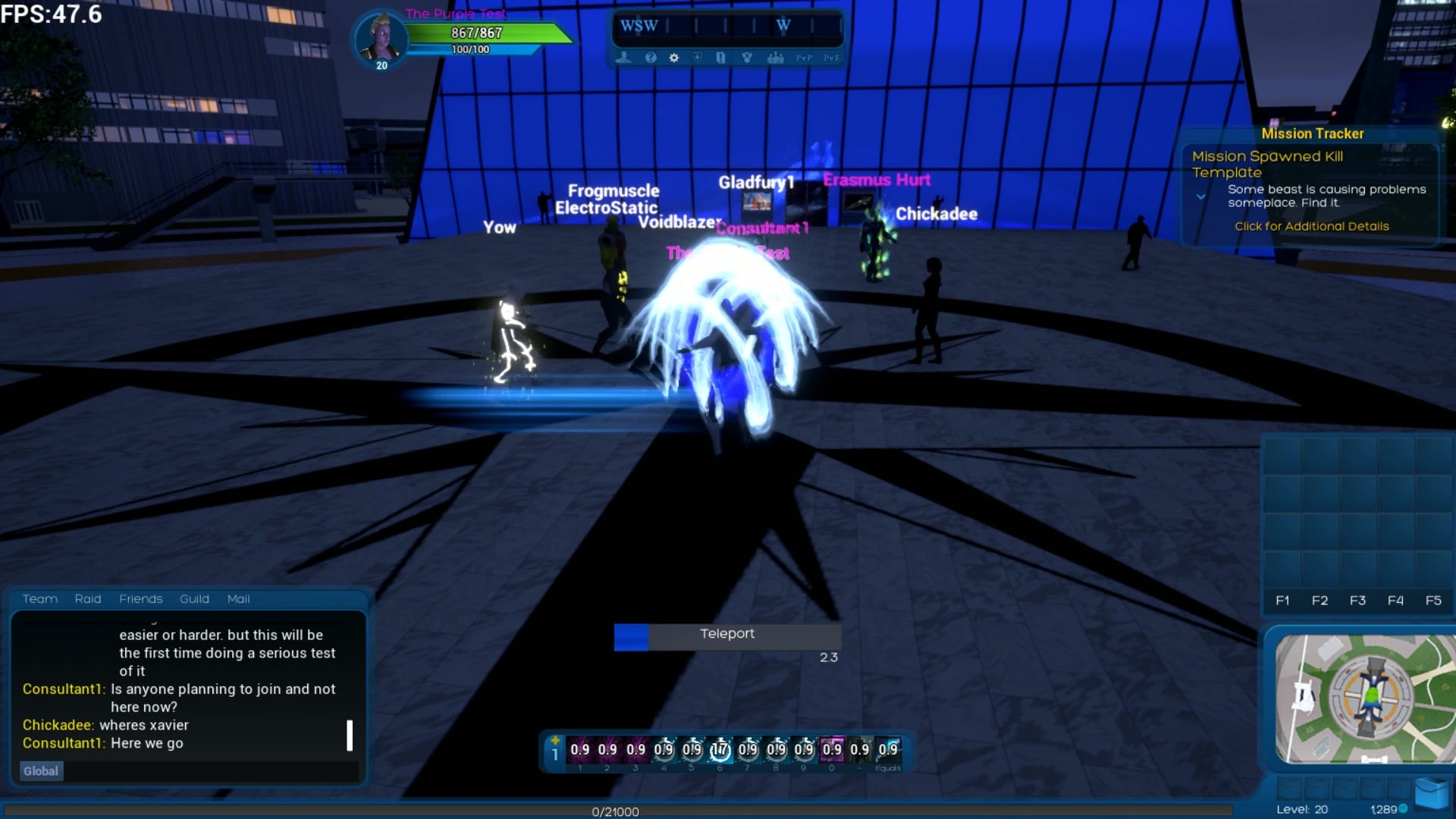 Why walk to the Arch when you can teleport?

During the community event we did several tests, and we added some features on the fly. For example, the number and level of the enemies that spawn is based on the number and level of the heroes in the area to oppose them – in this case, the area around the Arches in the center of Apotheosis City. We also gave the devs the power to increase or decrease the difficulty of the next wave of enemies on the fly. 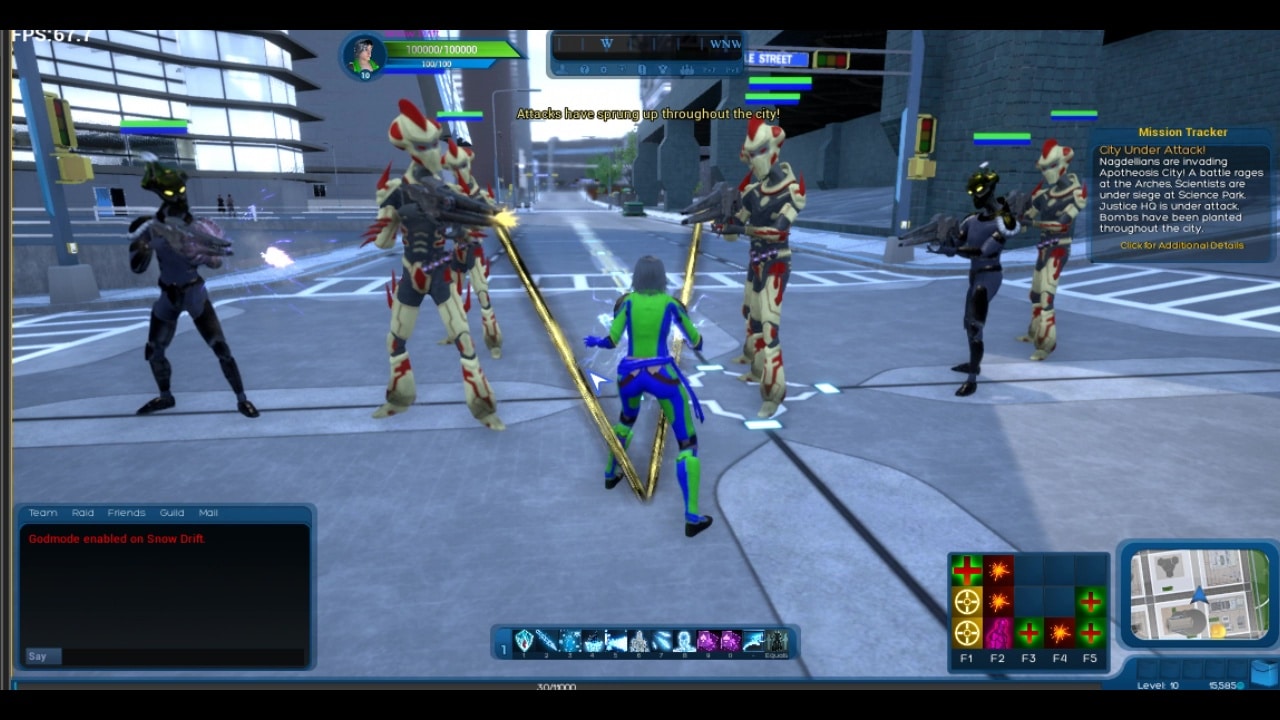 The big guys are the Nagdellian Commanders and the others are lieutenants. Don’t let them take over Apotheosis City!

In some of the other riot tests, we discovered that our powers were interacting in ways we did not expect, which caused the server to crash. We fixed that several times, as we discovered more and more about it. On one run we also discovered that the big boss could kill devs, even if they were in God Mode – one dev declared that he just discovered he was only a puny god. We also decided that we need some more exciting attacks for these enemies, and that the difference in difficulty between wave one and wave three needs to be reduced, most likely by increasing the numbers and power of the Nagdellians in wave one. 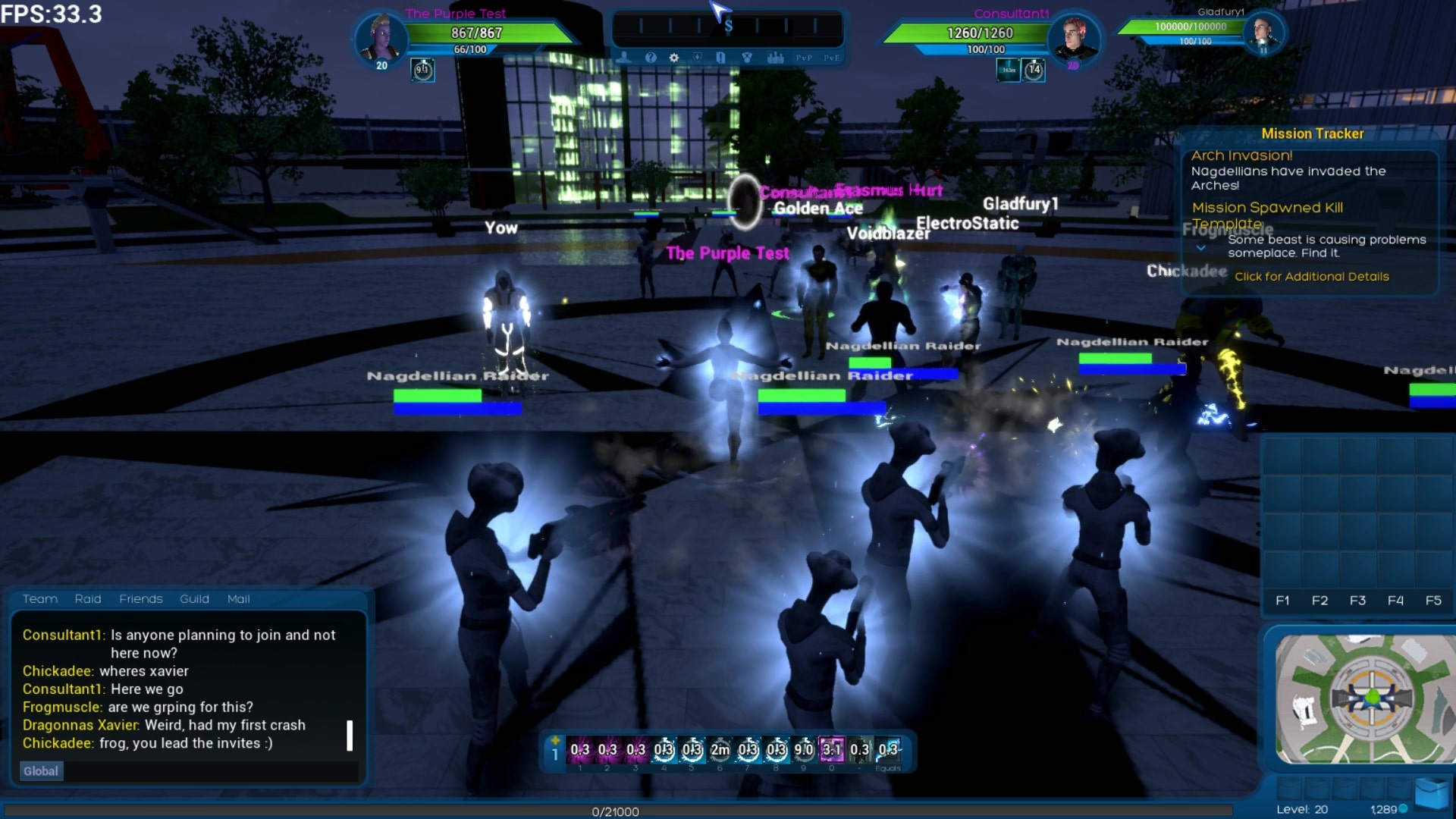 Purple Test, are you buffing the enemies as well as the heroes? That’s not even supposed to be possible…

This is an internal video, and the point of view shifts between the devs and one player who recorded the event. We share it mostly as an example of what we’re working on as we prepare for the larger invasion test still to come in the first half of 2020. For those who participated in the community event, here’s a quick list of expected fixes and upgrades that you will see during the upcoming invasion test.

Teaming XP and rewards will be working. Hopefully working perfectly, but at least working as far as we can tell when the invasion test begins.
Enemies will be enhanced and more dangerous. Some team wipes may occur, so only the hardiest should offer to help us test invasions… Just kidding! Everyone is welcome.
All participants will receive at least one account-wide badge that will carry over to the launch of the game. 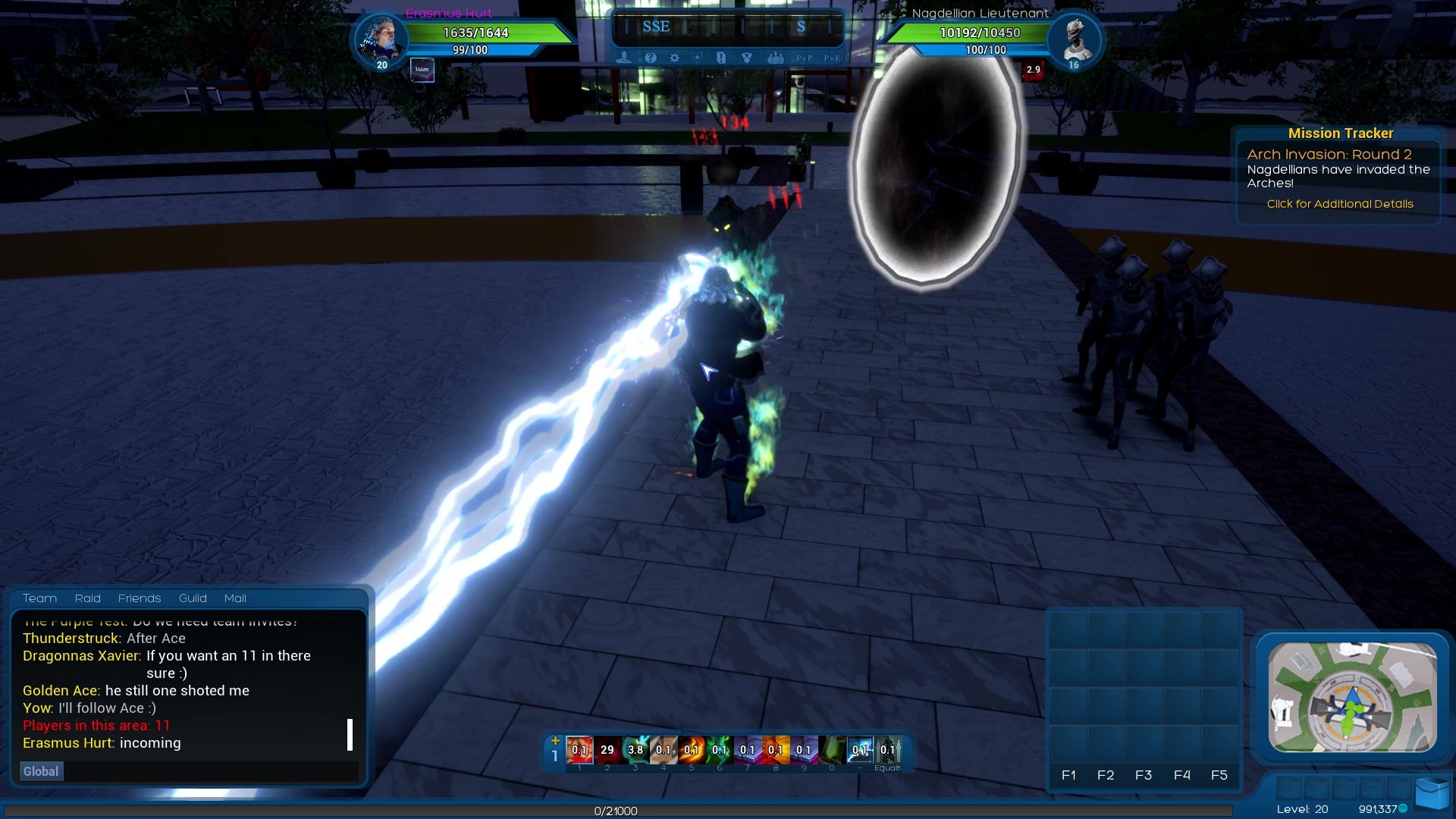 Lightning powers look great at night. Try not to get zapped, though.

We hope you enjoy this internal video. The fight is clearly not perfect, but this kind of live testing is invaluable for us – a lot of problems just aren’t visible until dozens of players run around at once. It’s probably not a surprise to anyone that the most valuable hero in the raid was a player, not a dev. We’re making this game for all of you.

See you at the invasion test! 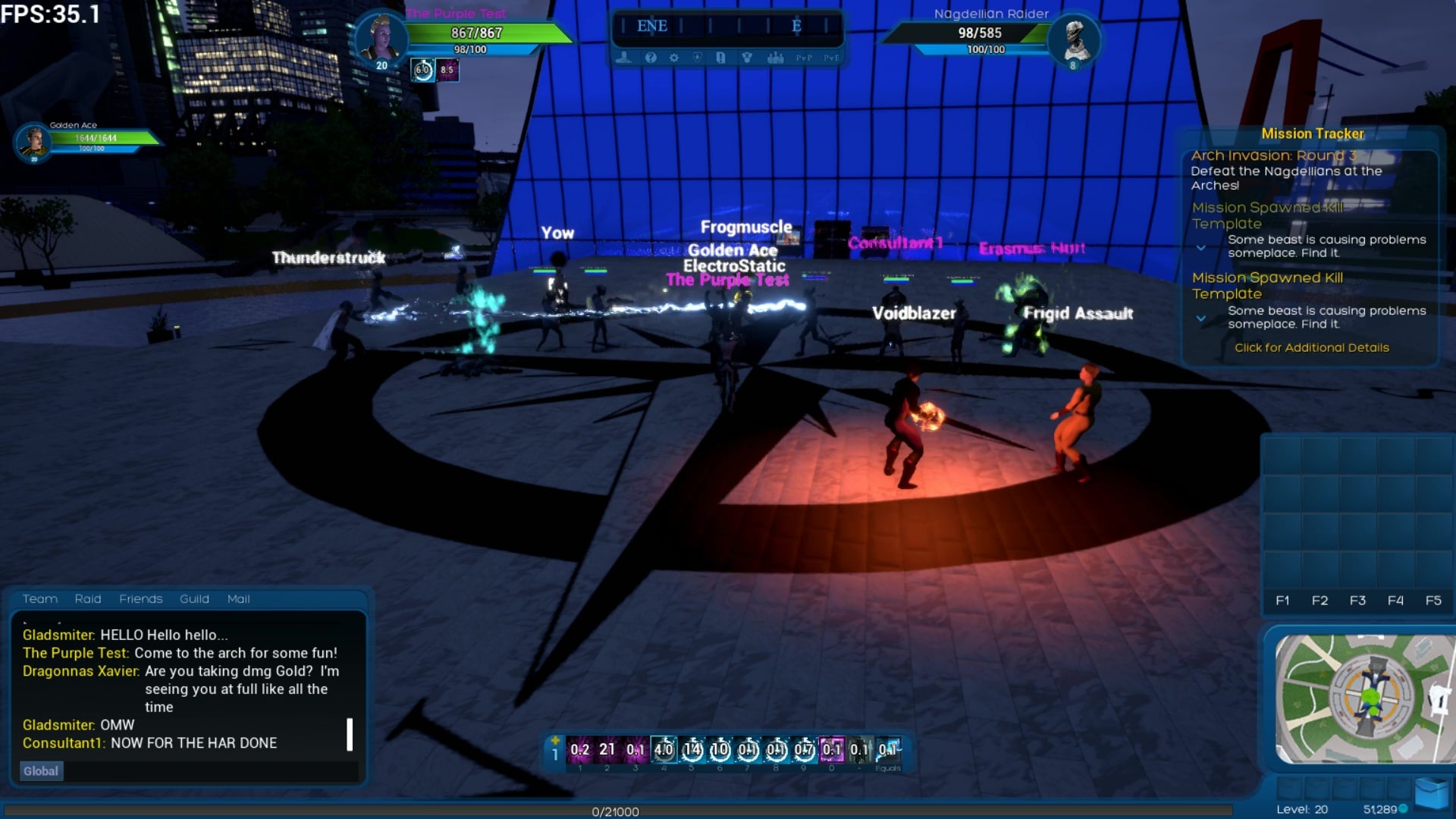 We’ve come a long way from when we only had torches.

1. This is internal footage produced to document what went right and wrong during our first runs of the event called “Riot at the Arches.” We knew there would be some issues, and there were some, but it was still quite fun!

2. This video is assembled from multiple pieces recorded by different players on different computers. However, since all of it except the daytime picture in the newsletter was recorded during the recent community event, recording was always done in a client/server arrangement. This is the real game that you are seeing. It’s worth noting that recording gameplay in any game typically cuts the player’s usual FPS in half, so the FPS you see on the screen is half the normal FPS for each contributing player or dev.

3. One of the biggest and oddest things we found in the test was that buff and debuff powers projected by the heroes were interacting in unexpected and negative ways. In a sense, this is why we test with players. This problem wasn’t detectable in our dev-only tests.

4. It did seem that ranged players had something of an advantage in this raid, and we are thinking about how to get the heroes, and the enemies, to bunch up a bit more. Would that be desirable? Let us know in the forums?

5. Teaming code for sharing XP and loot was not working properly during the community event. Had it been working properly, we would have needed at least two teams to accommodate this number of heroes. The maximum team size in SoH is ten players.

6. The top contributing player in this run, Frogmuscle, received the reward for being the top contributor. In the future, every contributor will receive a badge the first time they successfully complete a riot or invasion mission. 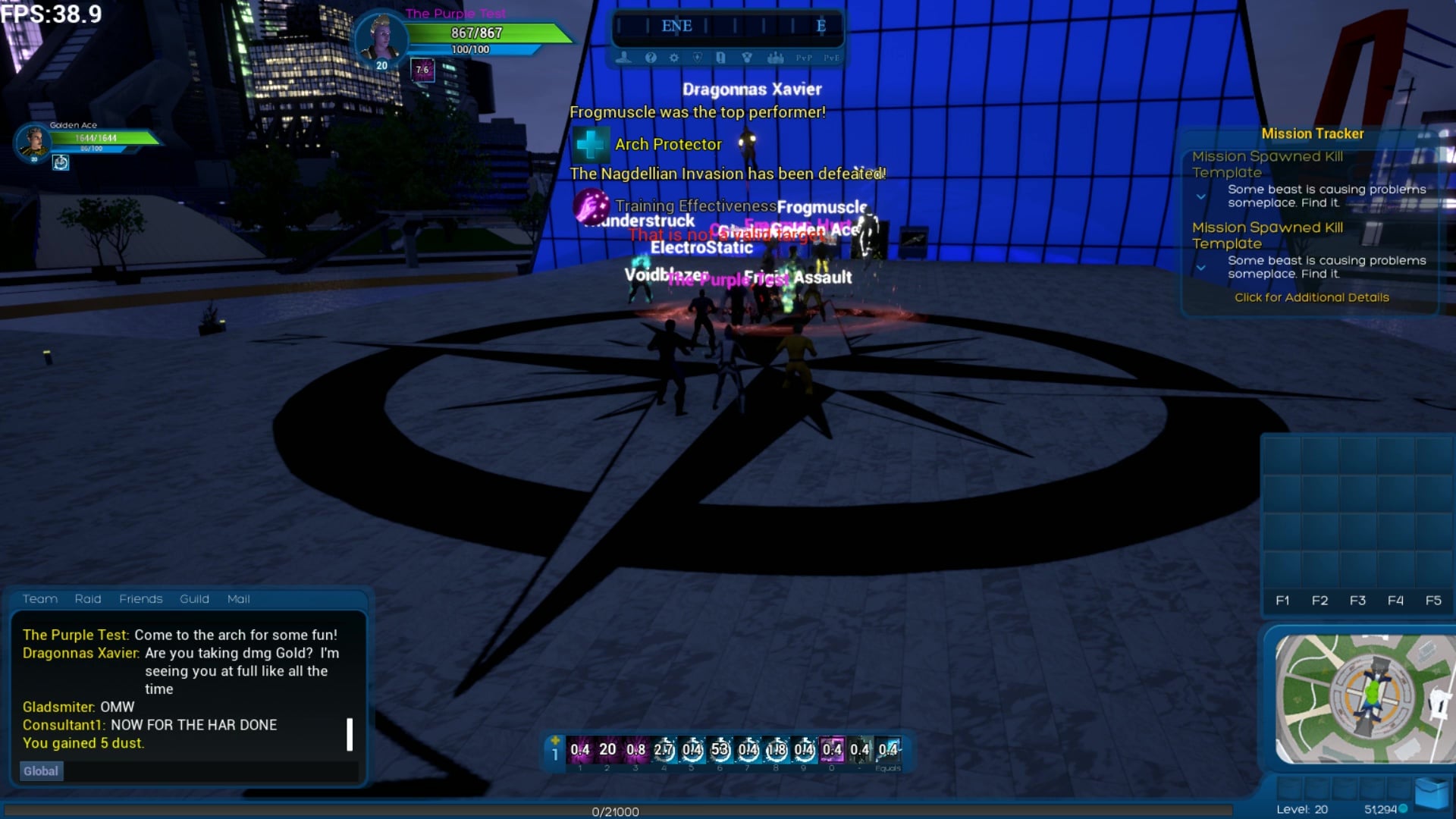