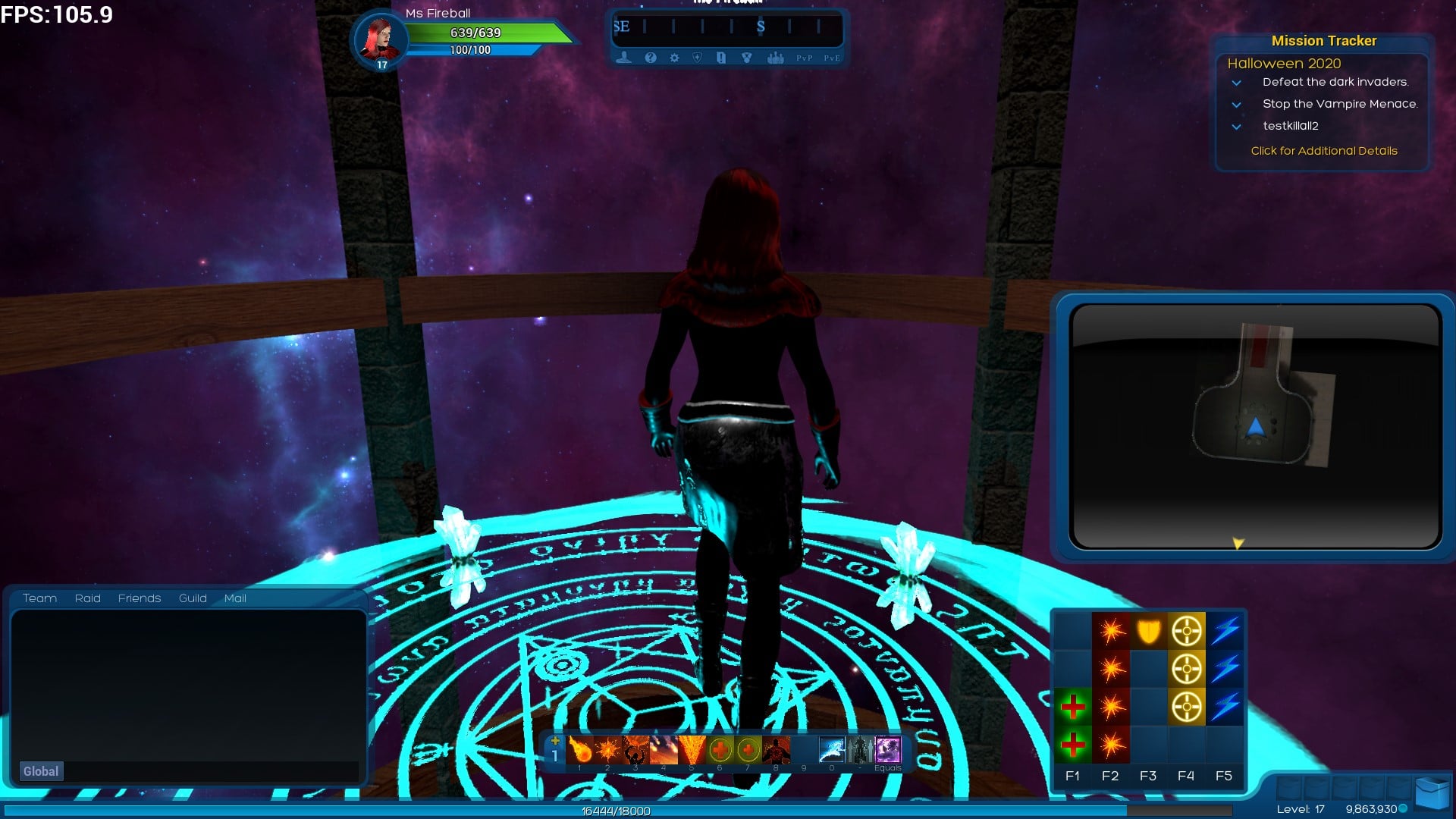 In space, no one can hear you gorge on candy. True fact.

We’re sure that all of you have noticed that missions and mission content are the current focus at Ship of Heroes. A lot of the features of the game are already coded, so it’s time to add more and more playable content. Our last newsletter talked a bit about the kinds of missions we’re creating, and the vision for the game. This time, we’re simply wishing everyone a Happy Halloween and showing off a special mission map we created just to celebrate the holiday. 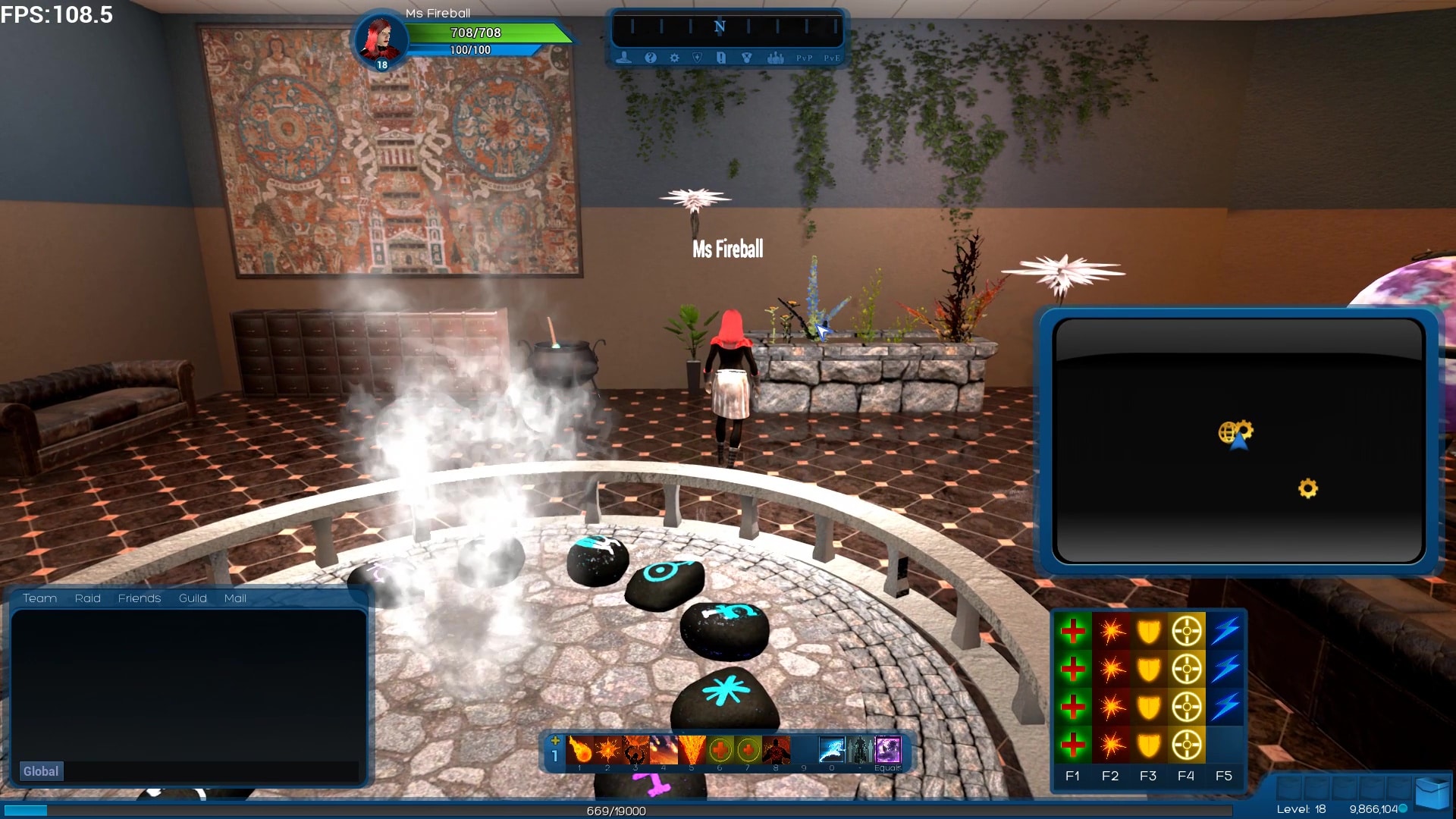 My office is cooler than Meltdown’s. You agree, right?” – Iris the Great

The mission follows the normal pattern for MMOs. You visit the contact to get the mission, and she tells you the background. In this case, you visit Iris the Great, who is the head of the Mage’s Council aboard the Justice. That’s right, for those of you who are new, there is magic in space. In fact, magic is more powerful in space than it is on planets. Iris tells you that on Halloween, the barriers between realities are weakened, and as a result, strange things happen. She directs you and your team to the college dormitories, to investigate reports of peculiar goings-on. 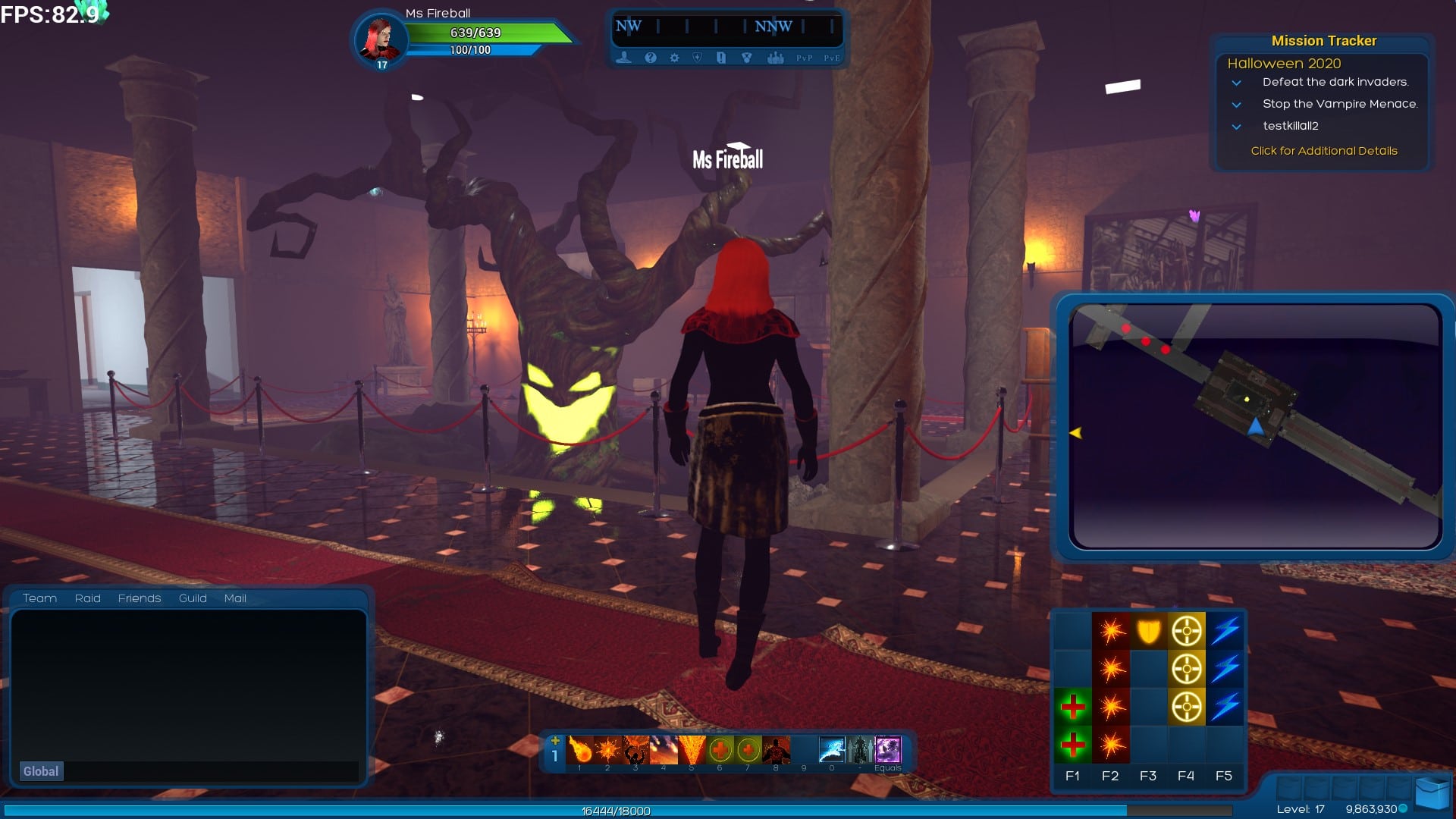 Uh, guys? I don’t like the way that tree is smiling at me…

Now you get to see us charge through a map in which a vampire lair has somehow fused with the boys’ dorm at Apotheosis University. As you might expect, both sides of this process are dissatisfied with the fusion. This sort of campy map and mission is in the spirit of both the holiday and special issues of comic books, whose stories inspired the whole superhero genre. 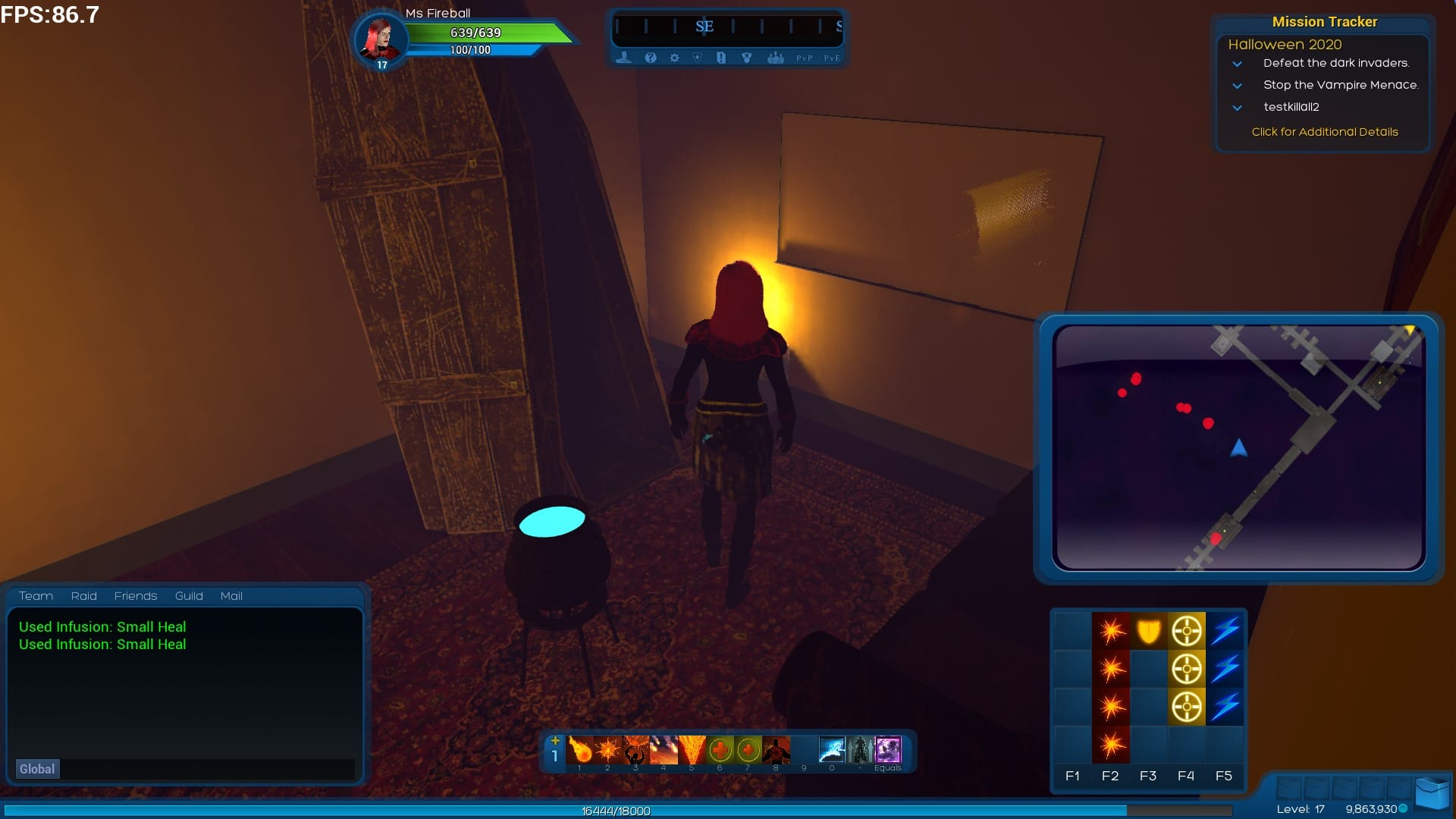 It was a bit of a nasty shock for everyone when this one came out of his coffin!

In this case, our technical artists get to use some features of the Unreal engine that we usually do not employ: smoke and fog generators, spooky lighting, and a collection of the Halloween-themed pumpkins, ghosts, and vampires. It’s a bit of fun and a change of pace from the more common science fiction-themed missions we often create. But it is also an example – SoH is not locked into just sci-fi. There are many worlds, even alternative realities, and there’s a lot of powerful magic in space. It’s all in a day’s work for our heroes. Notice that the map is large, powers and FX are plentiful, and FPS is still fine. This mission is in a controlled instance, of course, which improves the player experience. 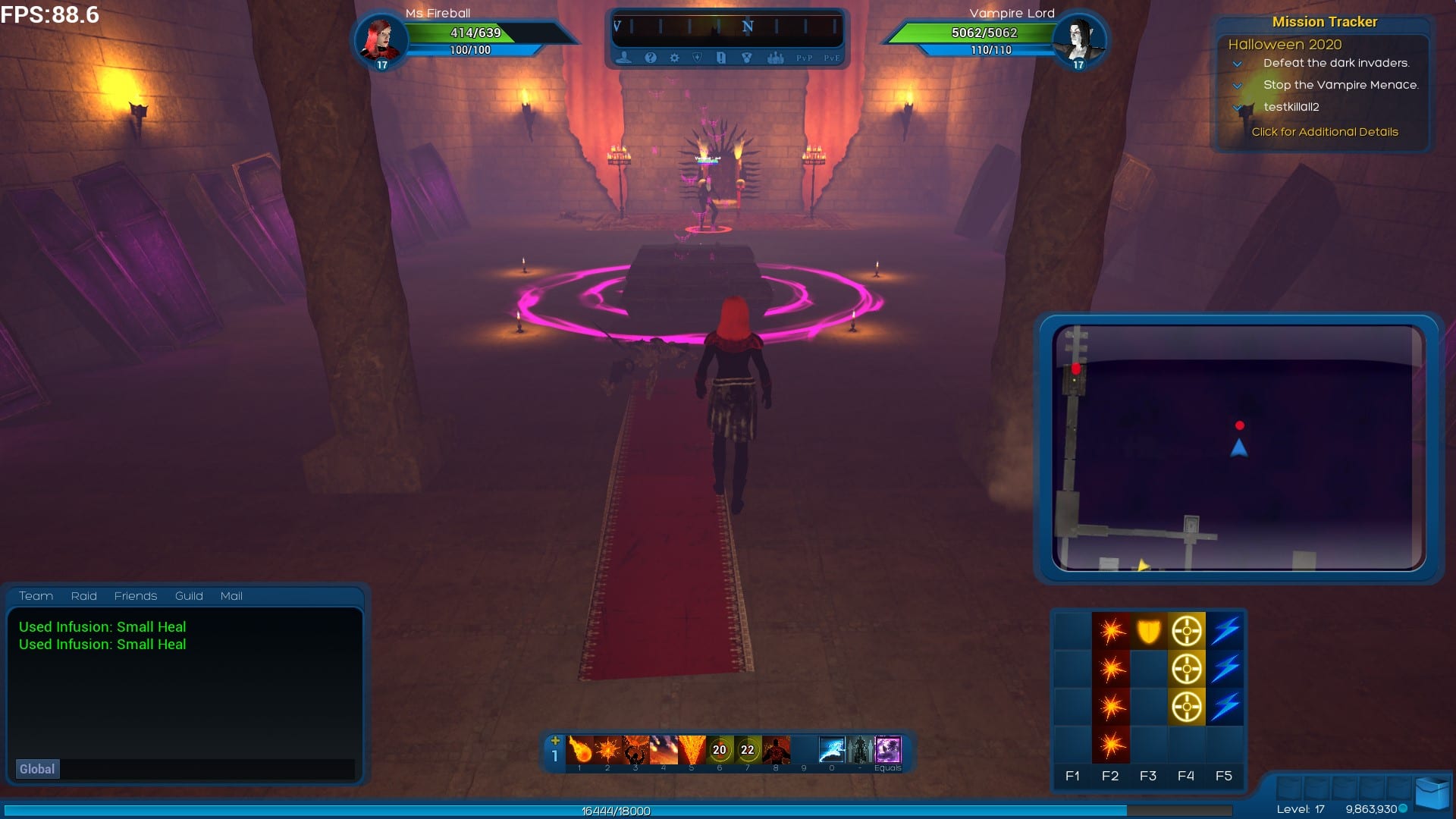 Retro lairs like this are surprisingly popular among villains. They say the classics never go out of style…

We’re excited about ramping up our mission content and getting ready for a launch of the game. Hopefully this video gives you a sense of what is happening behind the scenes. And of course, have a wonderful, and safe, Halloween

Donate to Ship of Heroes

1. This video was created during October using miscellaneous art assets, a few purchased packs, the enormous skills of our art team, clickable mission components that we produced previously, and the advanced tools that we’ve built for mission creation in SoH.

2. This video was recorded during a live run-through of this mission by one of our devs, in a client server arrangement exactly like what a player experiences. We sped parts of it up to keep the viewing time reasonable.

3. The playing time for the character shown, including getting the mission and wrapping it up, was about 33 minutes.

5. Yes, the dev hero in the video was killed six times. That can happen when one is trying to solo a large map as a Devastator. Be cautious, or bring friends 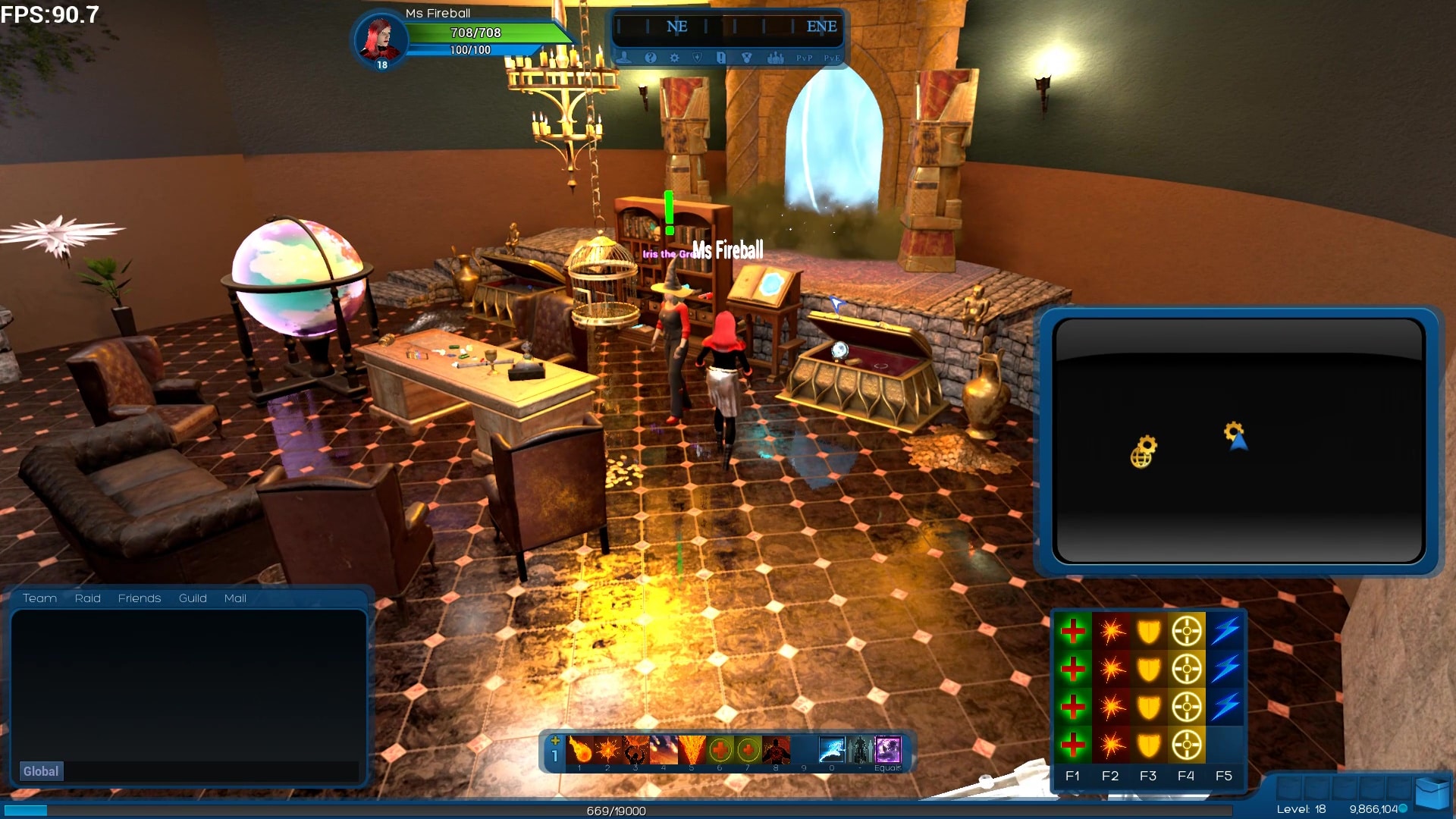 There are perks to being the Archmage of the Mage’s Guild.