Intel/ Nvidia has some real competition!

Intel/ Nvidia has some real competition!

AMD released their new line of CPUs and GPUs, and let me tell you, Intel and Nvidia are shaking in their boots. Especially Intel.

Nvidia may still have the fastest video cards - for now - but very few people spend the cash to get the top of the line, especially when that $1000+ top of the line video card is a door stop in less than 7 years. In 2012 the top of the line video card was a GTX780 Ti with 6 GB DDR5 VRAM. It is still a viable card in today's market, but it is not as fast nor as capable as what you can buy for a bit over $200 USD now. You could have bought an almost as fast $300 video card and replaced it every 3 years (2015 & 2018) and still be $100 ahead, while almost surpassing that super card's performance with the one you bought in 2015, and blowing it away with the 2018 card.

Currently, in the market that most PC gamers play in, the GPU performance per dollar crown most definitely goes to AMD with their NAVI chipped Radeon 5700 and 5700XT cards. These cards compete favorably with the RTX 2060 and RTX 2070. And they are much cheaper. Nvidia is getting ready to release their RTX 'Super' cards, but these will not return the value per dollar crown to them. Only cutting prices will do that.

And that is the crux of the matter. Even if you live and breath Nvidia green, having competition means that prices are going to drop. That RTX 2070 card is going to have to drop in price to compete with the 5700XT. Who wins? WE DO!

The CPUs are actually in a class of their own. Intel is going to have to start looking at releasing their 10th gen CPUs faster than they were planning. Only their top of the line 9th gen i9s are faster than the AMD chips. Once again, competition not only helps pricing, but moves the tech forward.

So who wins? WE DO!
IN BRIGHTEST DAY, OR DARKEST NIGHT
NO SPAM SHALL STAY UPON THIS SITE
FOR THOSE THAT FEED THIS EVIL BLIGHT
BEWARE THE PAIN OF GUARD DOG'S BITE!
Top

AMD also makes all the CPU/GPU's for the Playstation and XBox. Here's an interesting article on the upcoming PS5:

Today's super AMD parts are made using 7nm technology. I can say that these were designed last year, and we haven't stopped in the year since then.
2020: 43 years on the Net.
Top

Here is a section of an MMORPG.com article done on the video cards.

With RDNA also comes the new Radeon Display Engine. As you can see, on the launch cards, there are four display outputs for HDMI 2.0b and DisplayPort 1.4 HDR. With support for these new standards, the cards could theoretically support 4K 240Hz, 4K HDR 120Hz, or even 8K HDR 60Hz (though you’d obviously never run these particular GPUs that high). Still, it’s a solid move that points toward the future of gaming monitors and graphics rendering.

RDE also supports Display Stream Compression, which will allow you to produce those amazingly high-res, HDR images without the need for chroma subsampling or multiple cords.

Finally, the RX 5700 series brings with it the latest generation of the Radeon Media Engine. This new version brings improved hardware-level decoding support for H.264, H.265, and VR9 decoding.

On the software front, AMD is bringing interesting and exciting improvements both competitive and casual gamers. On the competitive side, we have Radeon Anti-Lag (RAL). In essence, RAL monitors CPU processes while you’re gaming to keep them better in sync with the processing being done by your CPU. Keeping better sync between components, AMD is able to prevent overlap between the work being done and offer a 1-2 frame improvement in responsiveness - or a difference of about 20ms. This technique can have a performance impact, however, and is only recommended in cases where you’re limited by the GPU. 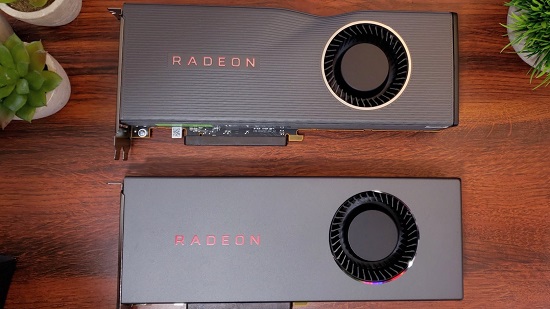 The latest update to AMD Radeon’s Adrenelin software also brings with it two forms of image sharpening. The first, Contrast Adaptive Sharpening, has to be enabled by developers while the second, Radeon Image Sharpening is based on this technique but can be enabled for any game. RIS is more than just an image filter. Instead of applying a sharpening effect to the whole screen, it runs an algorithm to identify only the areas that need sharpening and applies it there. So, if you’re running a low cost anti-aliasing setting that happens to apply a little more blur, you can enable RIS and restore crispness and clarity to your image.

Particularly interesting in the reviewers guide is this line: “When paired with Radeon GPU scaling, RIS allows gamers to configure their games to run at lower resolutions to optimize performance while still enjoying crisp, detailed full-screen visuals.” Reading this, it struck me as very similar to what Nvidia is attempting with DLSS, minus the neural network and need for developer/Nvidia support. Indeed, reading on, that’s exactly what they’re going for - 4K quality visuals with the impact of 1440p gaming.
I tested this and, though I don’t think it’s quite as crisp as native 4K, it does make the image much better than traditional 1440p with only a couple frames lost. This is the killer feature I almost let fly under the radar and am glad I didn’t. GPU Scaling/Radeon Image Sharpening is fantastic and a decent work around to the performance impact of actually running 4K.

IN BRIGHTEST DAY, OR DARKEST NIGHT
NO SPAM SHALL STAY UPON THIS SITE
FOR THOSE THAT FEED THIS EVIL BLIGHT
BEWARE THE PAIN OF GUARD DOG'S BITE!
Top

AMD also makes all the CPU/GPU's for the Playstation and XBox. Here's an interesting article on the upcoming PS5:

Today's super AMD parts are made using 7nm technology. I can say that these were designed last year, and we haven't stopped in the year since then.

That said, I would wait before I invested in this. All of the 5700XT vids are using the stock configuration with the lame stock cooling. Wait until manufacturers make some with better cooling systems. Also, the expected resounding price war may push the prices for the vid and CPU even lower!
IN BRIGHTEST DAY, OR DARKEST NIGHT
NO SPAM SHALL STAY UPON THIS SITE
FOR THOSE THAT FEED THIS EVIL BLIGHT
BEWARE THE PAIN OF GUARD DOG'S BITE!
Top

Yeah, my next computer system (early 2020), will use an AMD Ryzen CPU and a Nvidia GPU.
Top

I am not a Nvidia fan, nor an AMD fan, nor an Intel fan (well, my best friend used to work there, so I am a bit Intel-centric) - I am a huge fan of performance per dollar. Whoever gives the best performance for the amount of money I have to spend gets the money. Intel has had the crown in CPUs for a long time, but AMD wrestled it away. I fully expect Intel to make changes to get it back, but right now, AMD has earned the performance per dollar crown for CPUs.

Nvidia still owns the crown at the high end. Competition in the low end GPUs for Performance per dollar has always been tight. But up until just now, Nvidia owned the midrange market that catches most PC gamer's money. That has suddenly changed. Once AMD supplies matured drivers and manufacturers have made 5700 & 5700XT cards that use superior cooling systems, (both should be in place this fall), Nvidia is going to have a real fight to hang onto those dollars.

Wow, it looks like Nvidia is getting proactive! I just got an ad from Newegg saying they had an RTX 2070 for $399! That is about $200 off. So you can see how beneficial it is to us, the gaming community, Competition breeds tech advancement (Nvidia is releasing their 'Super' cards in answer to the AMD5700's) and aggressive pricing. So, WE WIN!
IN BRIGHTEST DAY, OR DARKEST NIGHT
NO SPAM SHALL STAY UPON THIS SITE
FOR THOSE THAT FEED THIS EVIL BLIGHT
BEWARE THE PAIN OF GUARD DOG'S BITE!
Top

Good to hear! AMD/ ATI changed the landscape of PC gaming when they released their HD 4000 cards, and they are poised to do so again with the Radeon 5000 series. Putting an executive in place that knows how to get things done is a very wise move. The gaming side of AMD will only be the better.

I want to reiterate; I'm not stuck on a brand, I am stuck on value. And having competition in the midrange from two separate suppliers is very, very good for increasing value.
IN BRIGHTEST DAY, OR DARKEST NIGHT
NO SPAM SHALL STAY UPON THIS SITE
FOR THOSE THAT FEED THIS EVIL BLIGHT
BEWARE THE PAIN OF GUARD DOG'S BITE!
Top

"Intel has explained how it struggled to bring 10-nanometer processors to market, while also admitting that we won’t see its 7nm chips until 2021.

It's beginning to look like Athlon all over again... except with ready information so available to anyone that cares, unlike in the late 90s, Intel won't be able to rely on its reputation to keep sales up. They gotta do some stuff to keep competitive.
IN BRIGHTEST DAY, OR DARKEST NIGHT
NO SPAM SHALL STAY UPON THIS SITE
FOR THOSE THAT FEED THIS EVIL BLIGHT
BEWARE THE PAIN OF GUARD DOG'S BITE!
Top
Post Reply
11 posts • Page 1 of 1

Users browsing this forum: No registered users and 1 guest