Okay, I will be up front about this. I want to fight Nazis! I want that Golden Age feel! I want to punch Hitler and Himmler and the others in the face!

that's impossible for a game set in the future or even in present time.

So my idea is the Genepremacists, basically Geneticists and Supremacists combined into a secret society of evil scientists. A group of deluded? delusional? mad? totally correct? geneticists that believe that they can bring about a Superior Human Race, starting with basic German/Aryan Stock, and blending it in with those whose features/abilities/powers they personally feel would help bring about superior humans. And yeah, they got Hitler's and other famous Nazis' DNA and have cloned them to help out - probably cloned Hitler a number of times, with various powers for each clone, in order to see which works best. And they have their hands on various other SS men and women or their descendants' DNA to make up lots and lots of SS Stormtroopers.

They have, unknown to all, a peaceful front group that is not associated with them, that runs free or low cost health clinics for the poor on board the ship. They use that front to gather and analyze those peoples' DNA to see if it would be useful to them. So one of the major charitable groups in the game could be a front for bad guys.

With that information, their SS Stormtroopers will go about kidnapping those people who DNA is especially valuable so that the Genepremacists will always have a large supply of that needed DNA for experimentation. This might be one of if not the earliest mission our heroes do against this group - finding out people are being kidnapped, finding where they are and rescuing them. Or stopping them from being kidnapped on the street while on patrol.

One or two items with swastikas or Hitler's portrait found on the scene where some, not all, of the kidnapped victims are held, would be the first clue about this secret organization. Well, that and the actual Stormtrooper outfits, made of the then futuristic cloth and armor, being a big clue.

I know we don't want to go too dark here and too disgusting, so breeding "farms" where captured women are forced to breed with selected "superior" men in order to produce even more superior offspring might be hinted at but never revealed/dealt with. Let's avoid the whole rape thing. Or just avoid it all together.

However, I think we might be able to go with women being held captive and having their eggs harvested so those eggs could then be scientifically fertilized with modified or "superior" sperm, and having a few of these places being taken down by the heroes and all those women rescued is doable. Probably use some kind of fertility drug on them to produce multiple eggs every month. And some men would also be kidnapped for their supply of "superior" sperm.

Actually, having the heroes being defeated might be one of these adventures. This only happens when they reach a certain level in the game. They wake up and discover that they are being held for such breeding purposed. This might be a tricky adventure to code. You don't want the heroes to automatically lose no matter how good the fight seems. But maybe if a hero gets defeated while soloing in some adventure, not necessarily related to this group, this triggers this event. Or all of a group of heroes get defeated in an adventure, this triggers it for the whole group. Or as a member of a group gets defeated, they get carted off for "medical treatment" and wind up kidnapped. And it happens one by one until they are all captured.

They wake up in a lab and learn what their fate is to be. Might be time for a super-Hitler clone to make an appearance at this point, revealing what their fate is to be. Can they escape in time? Their powers shackled somehow. They have to get free, but how? They get free. They fight or sneak their way out of the place ... almost ... then face down the or a SuperHitler Clone in order to make it out.

Even at very low levels, this group could be around, without the heroes actually knowing that they are involved with the Genepremacists. The group needs food for its people and captives. So some very low level members, not in SS Uniforms but maybe some kind of coin or token with the SS insignia on it or tattoo, need to go out and rob people, banks, atms, and jewelry stores and such for cash. They need to get food and hit grocery stores or the big agricultural/ranching areas outside the city area for stored foods to feed their hidden people. At this level, they could just be and actually plan to be mistaken for some fringe neo-Nazi group. Basically, the defective SS clones get these jobs and have no information about the Genepremacists or their existence. They are given false memories and placed into these low level "neo-Nazi" gangs to do their hidden and unknown masters' bidding.

It's only later on [and folks who read this] that the heroes realize those "neo-Nazi" nutjobs they fought while patrolling the streets their first 5-10 or so levels, are the tip of the iceberg of the Genepremacists' plots.

Then we have all sorts of Nazi named villains to take on, once the heroes are aware of this group, meaning having reached a certain to face them:

https://pdsh.fandom.com/wiki/Category:Nazi_Characters
Nice public domain list of Nazi villains that could be used

Anyway, that's my idea this week

Want do you think?
Top

Ohh boy, do I have the perfect costume for them too! These are costumes from the Bulgarian Kukeri Festival to ward off Evil. 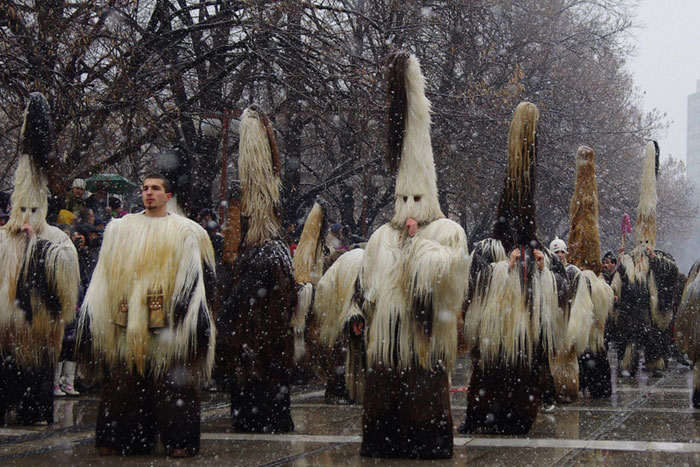 Those are some weird looking costumes. Love it.

You know what they say, pard. When fighting Evil, sometimes you just gotta get a little weird. hehehe

Users browsing this forum: No registered users and 2 guests