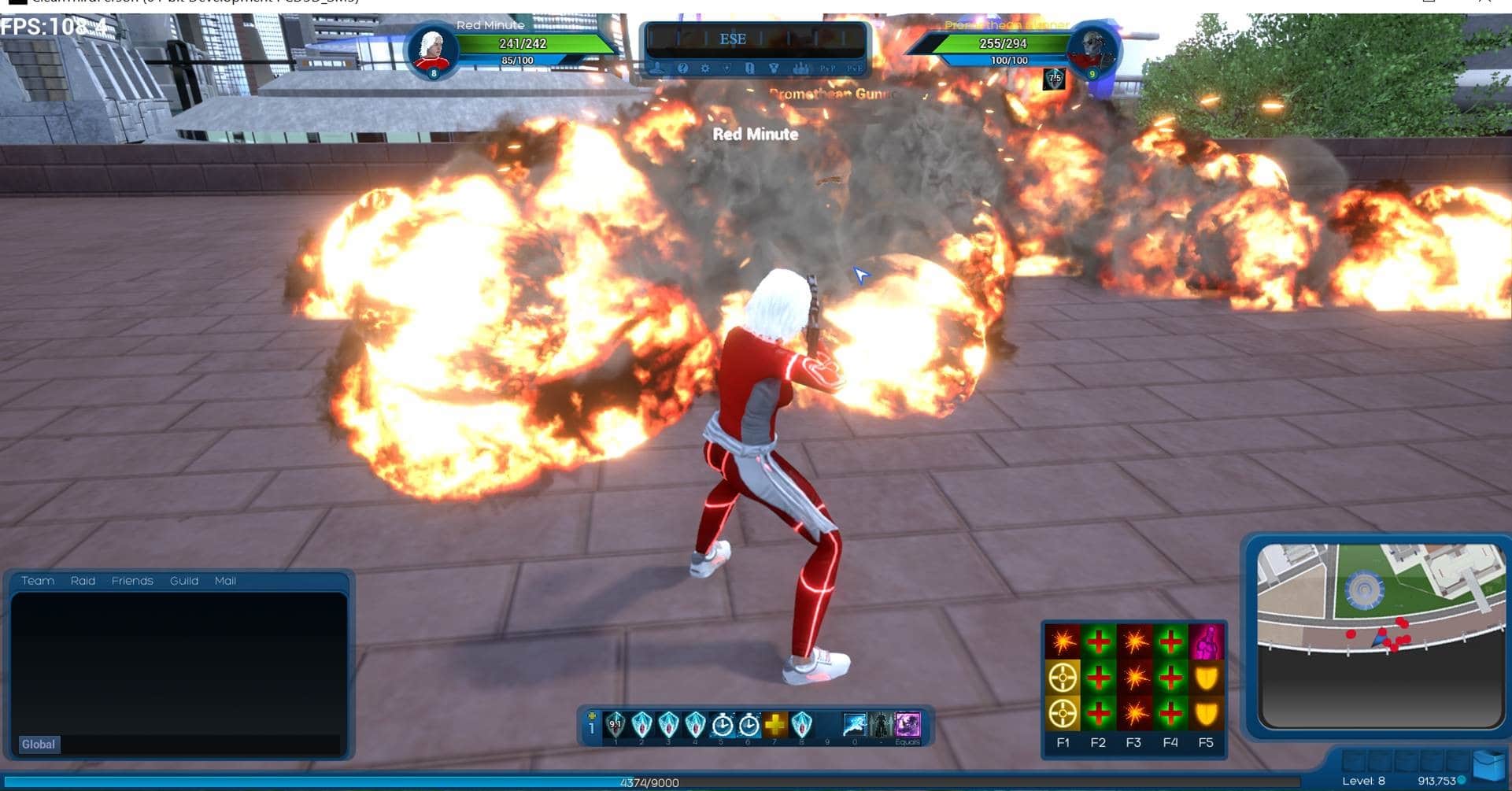 The March-April Ship of Heroes community event has now ended. This was a free event we hosted to add a little fun into the lives of our community members, many of who have been stuck at home due to the coronavirus. The event was a resounding success – more than twice as many people created characters and jumped into the city this time as did during our formal character creator Beta back in November. By our count, 1,277 people participated. More than 25 characters were leveled to 20, which was the event limit, over the last two weeks. That required a lot of street sweeping. 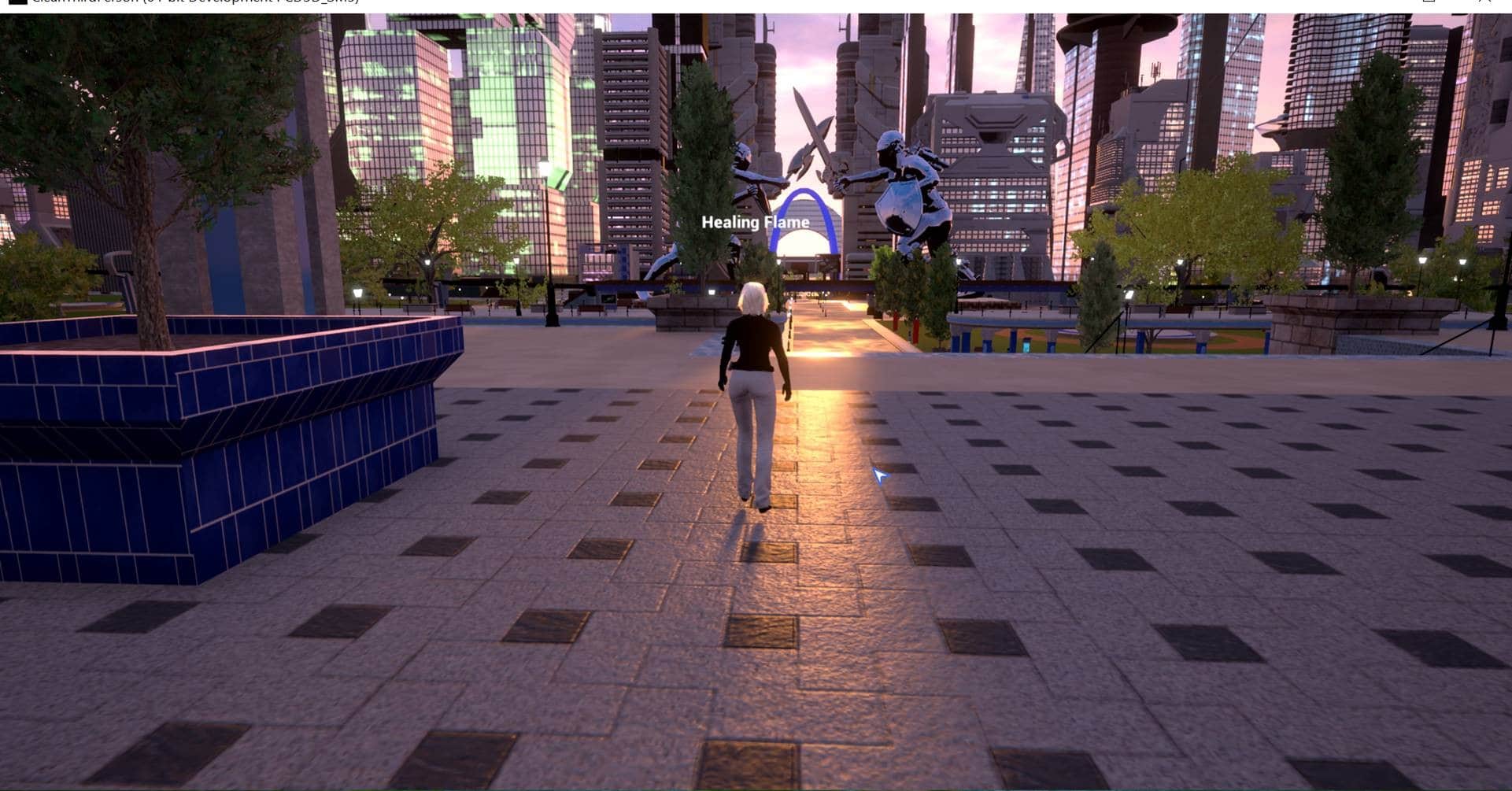 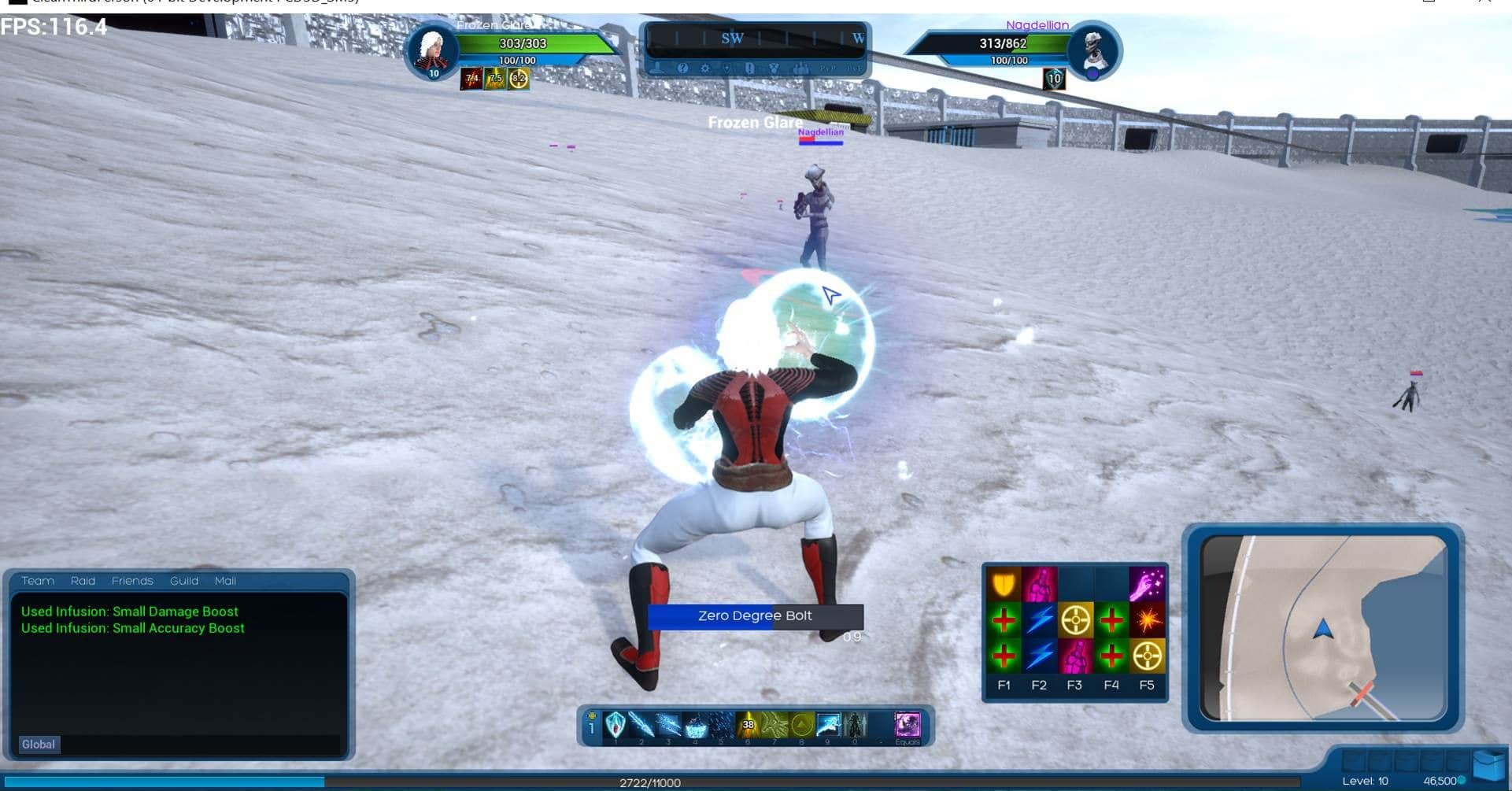 We’ve received an enormous amount of positive commentary and gratitude from our community for holding this event, and we want to thank you for that! Nothing motivates us like hearing the things that all of you enjoyed. We also want to hear what you would like to see fixed or changed before the next event. We’d like you to jump into the forums and contribute your ideas. Please put the most important requests higher on your list.https://www.shipofheroes.com/forums/viewtopic.php?f=31&t=3739 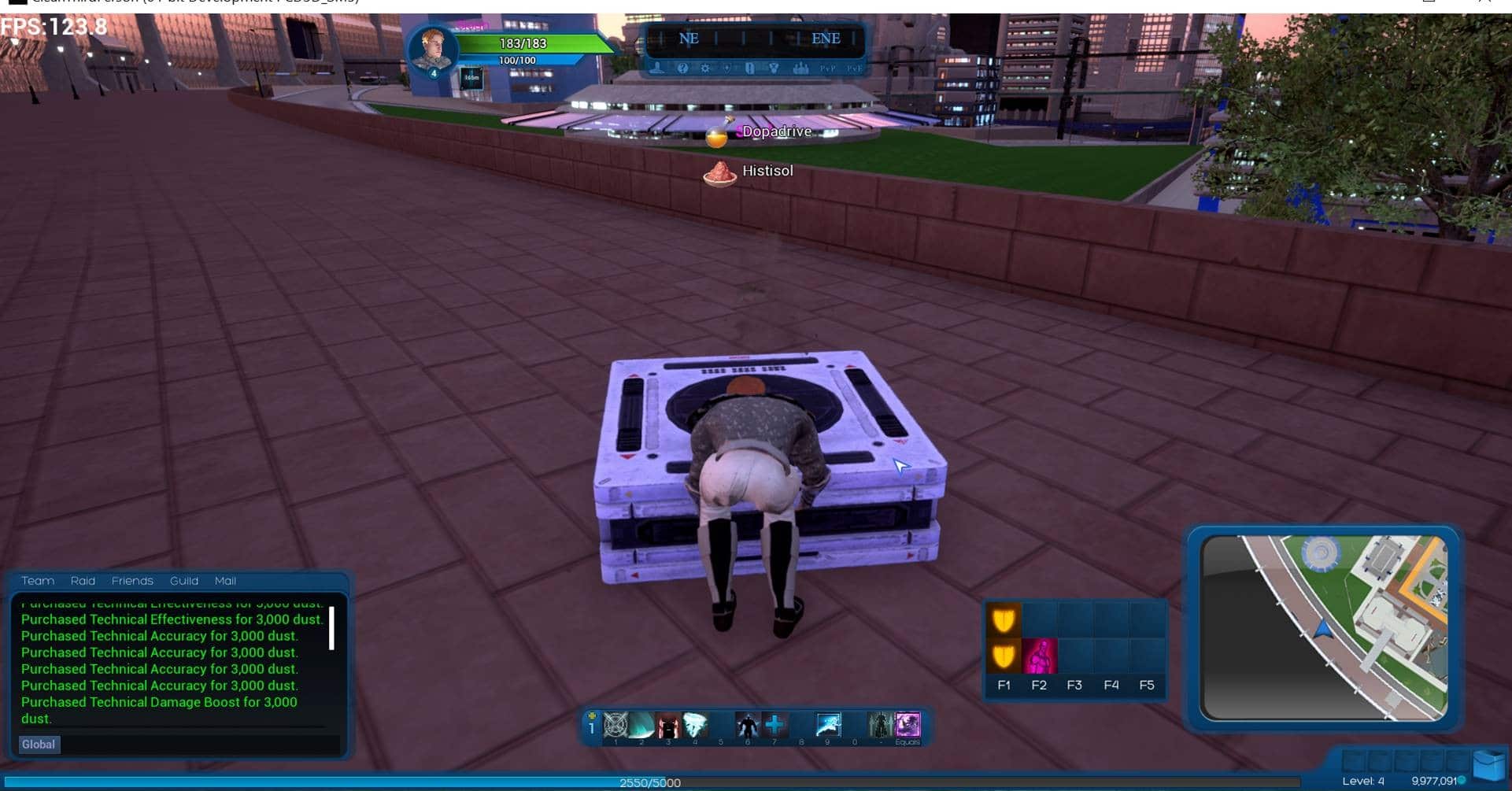 Players could test out the first version of our harvesting and crafting system during the event. This hero is gathering components for a crafting project.

In this event, we let everyone jump into our dev map and see what we do, and do not, have working right now. There were some powers without FX.. Some features were not working, like teaming, which we did not realize as the event kicked off, and there were bugs. But that was kind of the point. This wasn’t a formal, polished Beta, it was meant to be a look behind the curtain as Ship of Heroes is being built. As a result, we were fixing and upgrading things throughout the event. 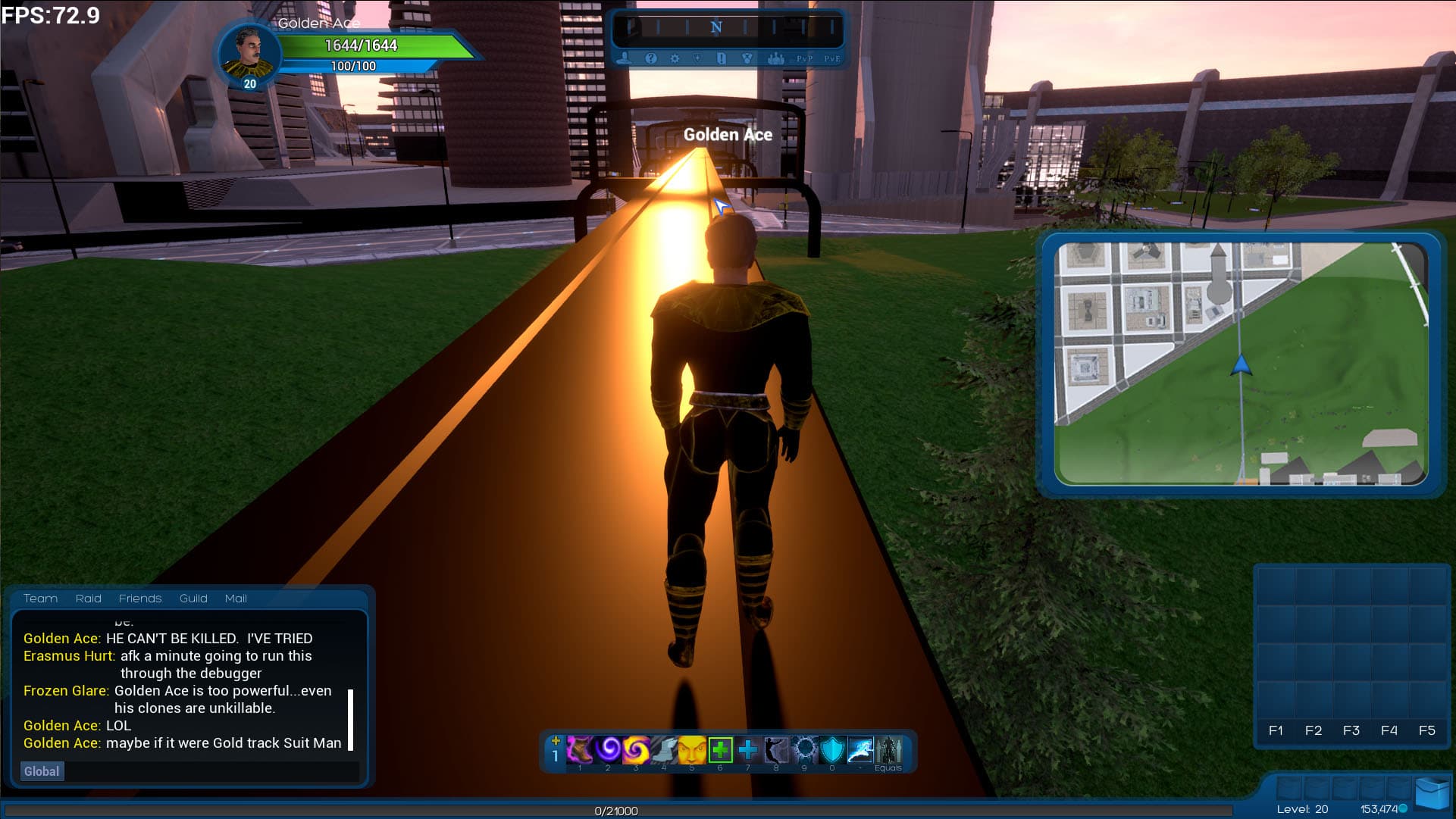 Some players sent us pictures of their favorite spots in the city.

From the almost-daily patch notes published in the forums, here are some of the highlights of what changed over the last two weeks: 1. We added several new costume pieces and fixed bugs on dozens of additional pieces. It turns out that our players have a superpower: they can find the pieces that are flawed and choose them over all others. Who knew? 2. Loot, dust rewards, and drops were all increased, then increased again over the course of the event. After all, we need to be able to afford those cool augments… though at least one player found a way to “obtain” augments for free, which has since been patched. 3. Controllers could not initially do damage. That was quickly fixed, so a number of people were able to level their controllers up quite satisfactorily. 4. We started testing riots, which are small scale events. We found quite a few unexpected code issues. Most of these were technical in nature, and either related to the Unreal Engine code from Epic, or to the interaction of buffing and debuffing powers during combat. We have fixes in place, but more testing is now needed before any invasion testing, which is the next big event on our schedule. 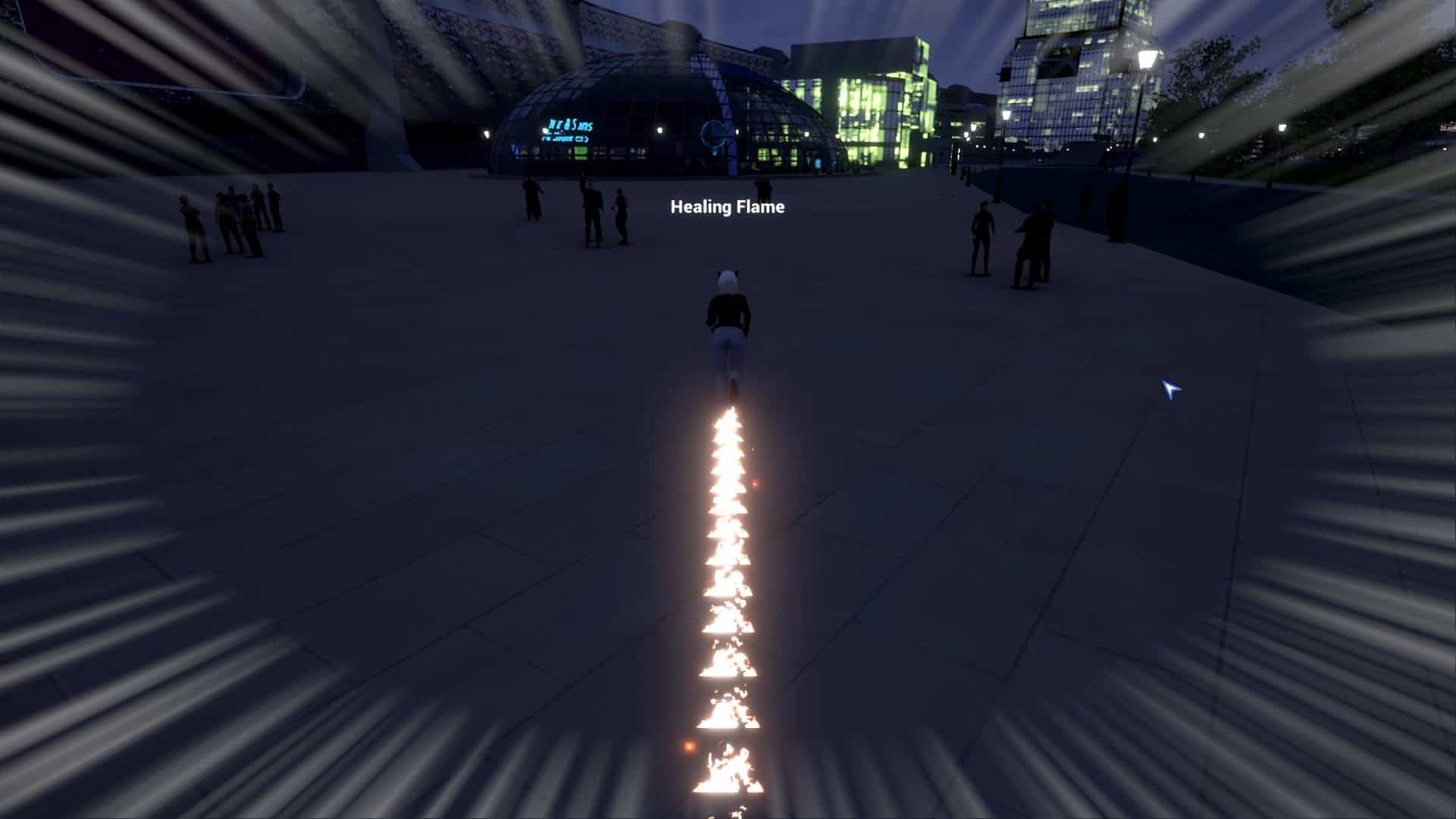 We’re racing on to our next big event in Q2!

5. We’ve been fine-tuning damage levels continuously, both for heroes and for enemies. Quite a few characters saw their powers go up substantially over the course of the event.. 6. We fixed many small problems with the map that were identified by players, and added a bunch of underwater plants and animals to the deep, water-filled ravine separating Apotheosis City from the Hazard Zone. If you didn’t get a chance to catch the upgrade before the event ended, check out the picture below. 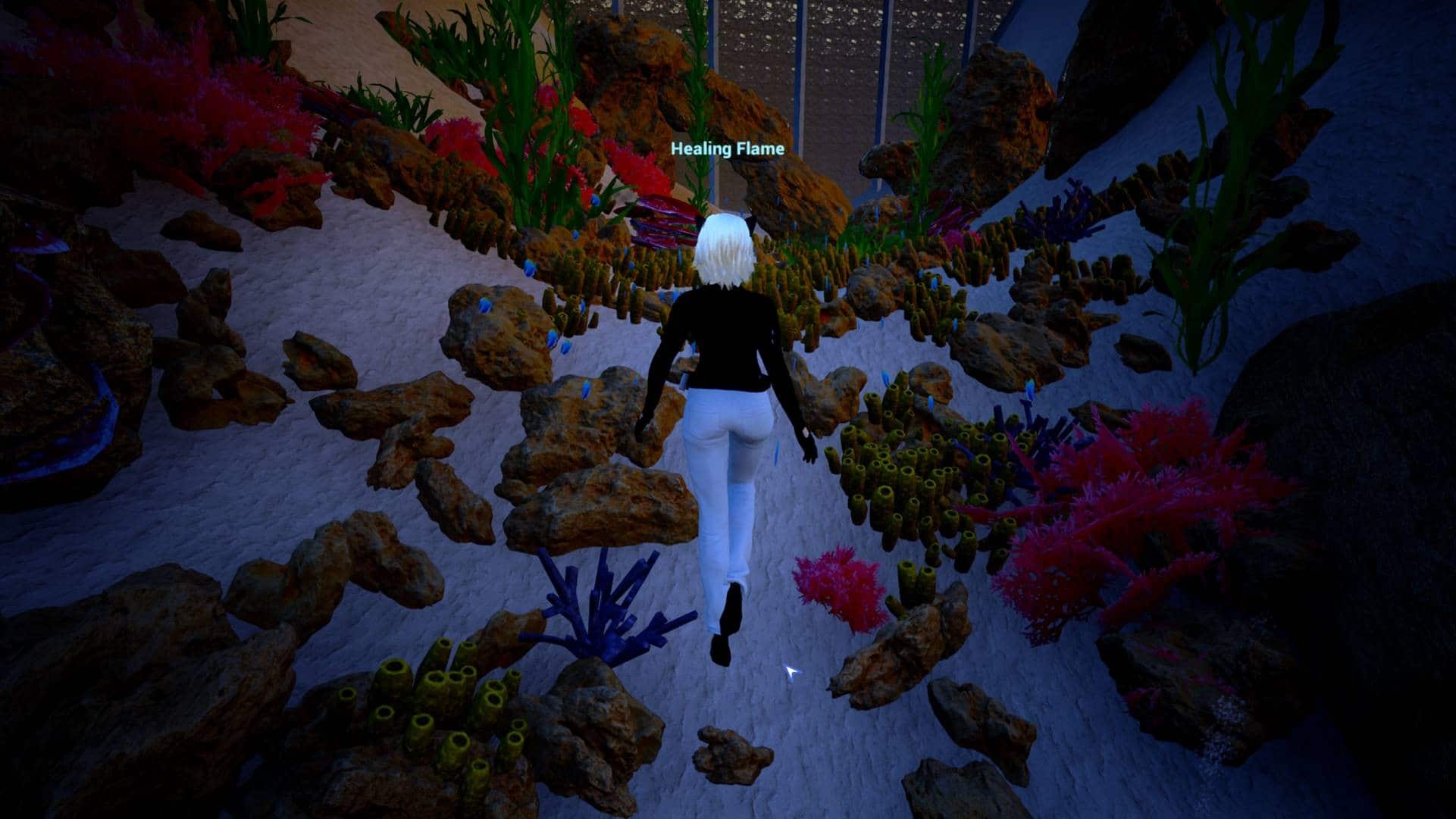 Has that alien coral always been there? Or has the Hazard Zone started spreading into the bay?

Another interesting new thing that players could test was the first version of pets, available on the first version of the controller archetype. As some of you noticed, we steadily upgraded the pet AI to make them more aggressive. We also changed the way augments work for pets, so a controller can now directly give their pets more damage and more accuracy. 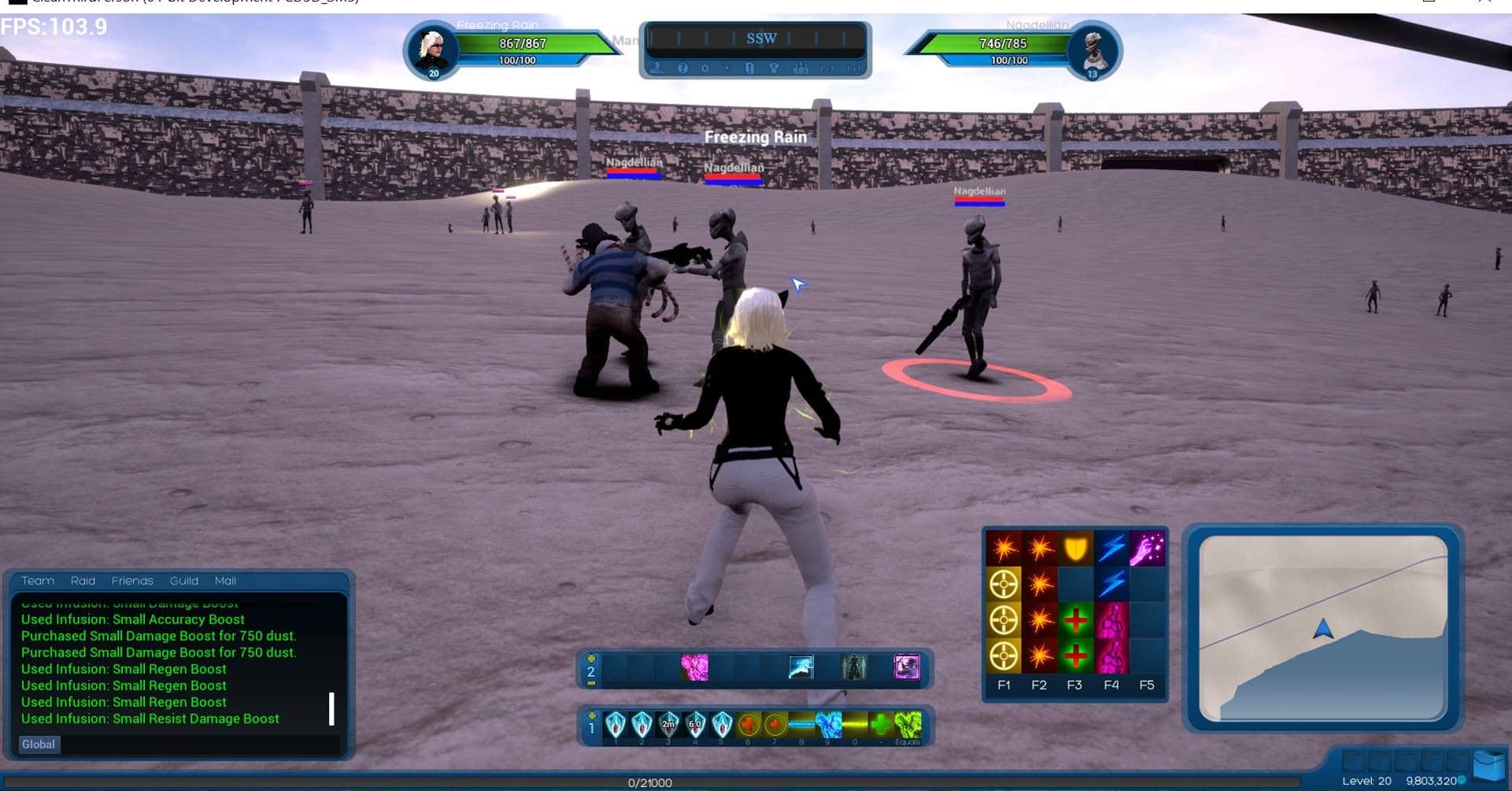 A controller is testing out her snow monster pet in the Hazard Zone. The pet has established aggro.

We hope you enjoyed this community event! The next Beta will be our invasion test sometime in Q2. In the meantime, we plan to release several videos and newsletters. 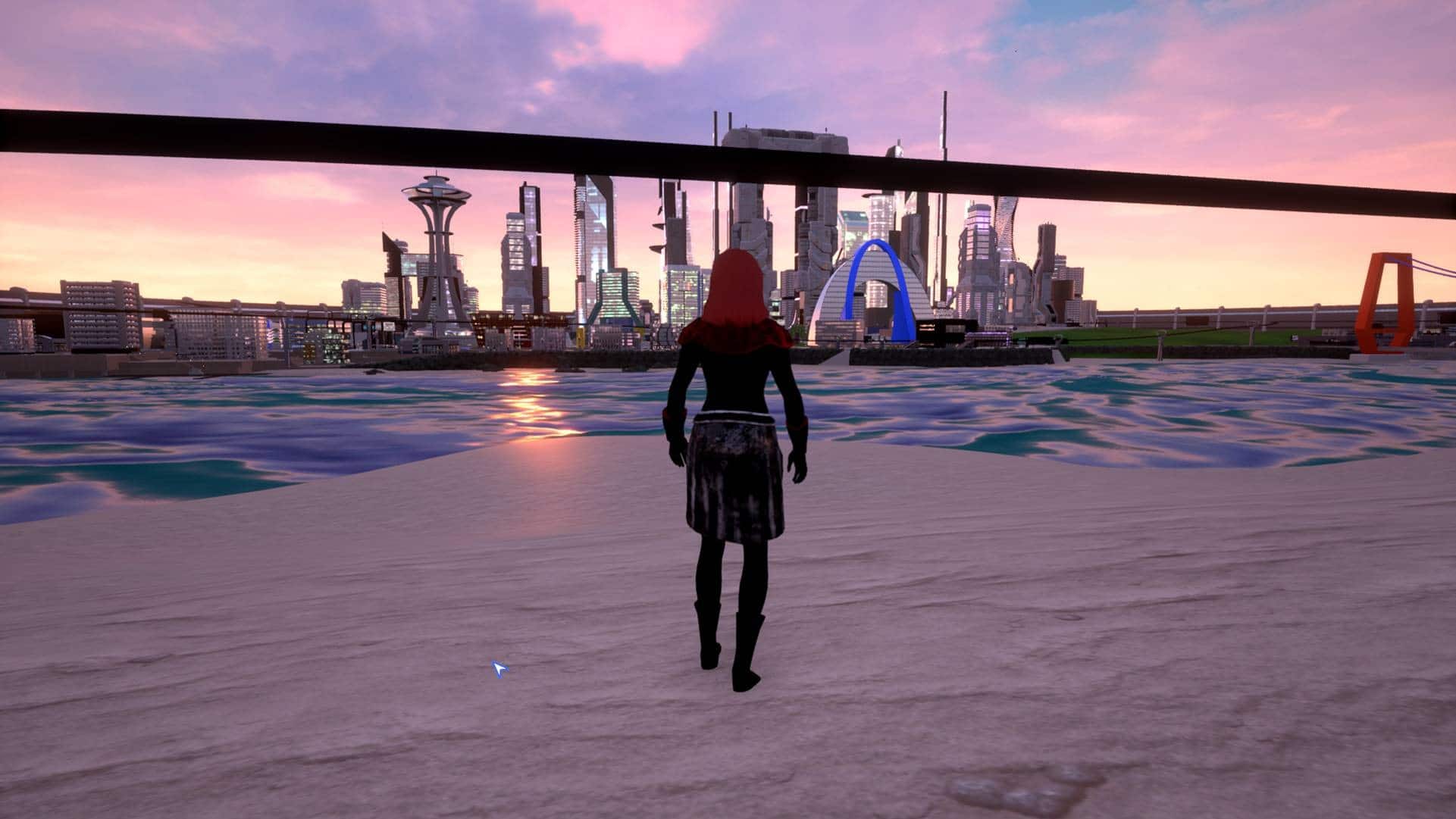 It may be goodbye for now, but we’re sure that we’ll see you again someday soon!

1. We used the same kind of server as in our last event, last November’s CCT Beta. It proved to have some capacity issues with our current code. We plan to have at least some of those problems fixed by the time the invasion Beta test rolls around. In the current coronavirus situation, it was impossible to rent a more powerful server for this event. Apparently we’re not the only game to need extra server capacity. 2. We added and upgraded FX for powers several times. For example, this is incendiary grenade, from the military weapons powerset, in action.

“Do you think this is enough fire? Maybe I should turn it up a little…”

3. We re-established the day/night cycle to let players test it out. But is the city too dark? Sometimes it was kind of hard to see the enemies… We don’t want to make it hard for anyone to street-sweep, as that should be the easiest and most newbie-friendly part of the game. 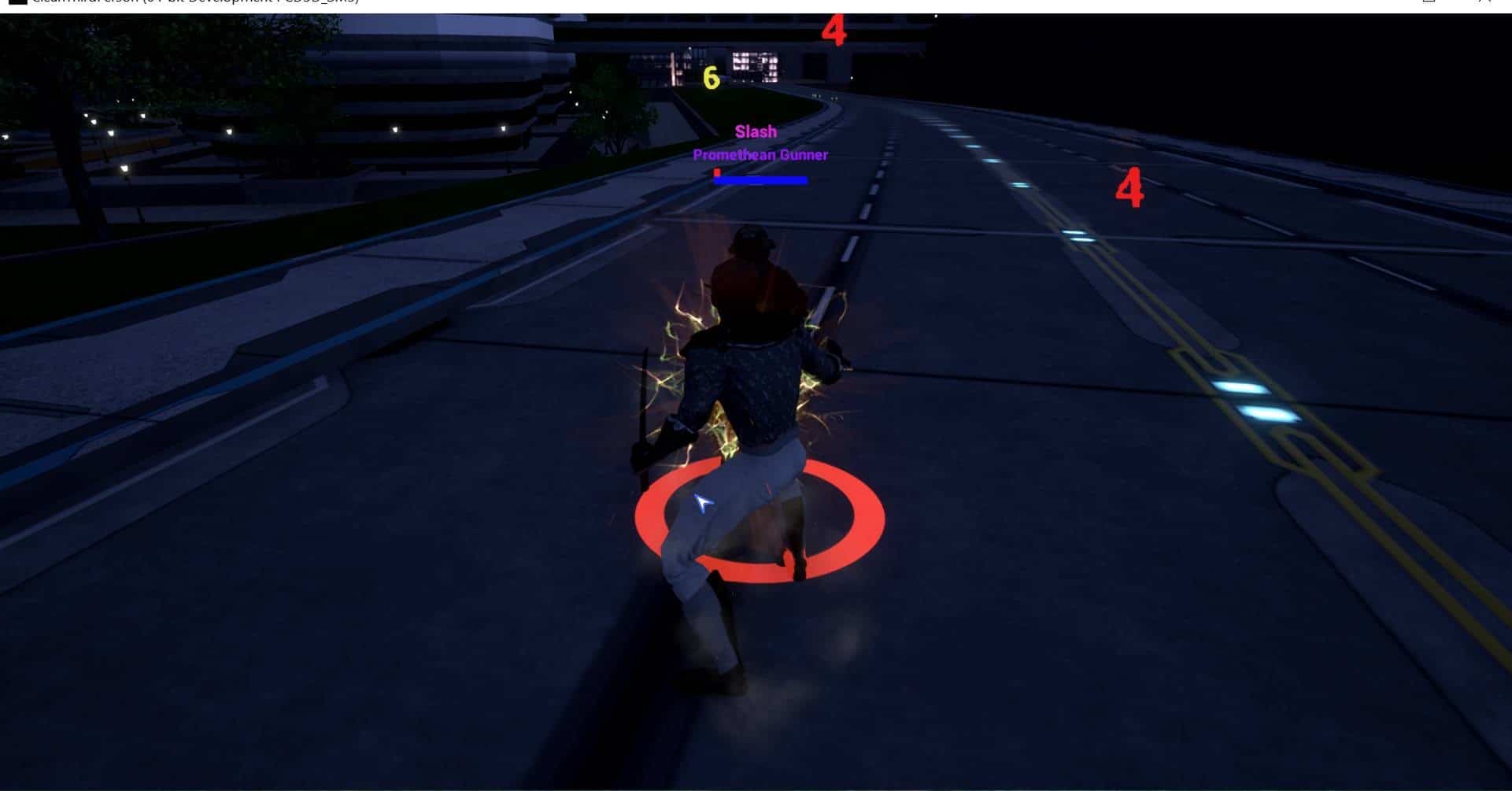 Twin Swords hero fighting at night. Is it too dark? Post in the forums to tell us what you think.

We’re a very small team and we depend on your support to build the game that you want to play, with a positive community and compelling content. So please help out if you can.