Heroes are defined as much by their powers as by their appearance. These powers are organized into familiar archetypes. Every archetype is designed to be fun both when playing with friends or playing alone.

Each archetype has a variety of primary and secondary powersets to choose from, so no matter what archetype you play, your character is always a unique character. 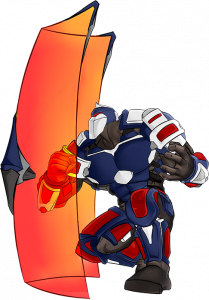 You make the choice about whether melee combat or ranged combat seems more fun. Tankers and Brawlers are melee-focused archetypes. They’re always right on the frontlines, and rely on defensive powers and higher maximum health to survive close-in combat. Defenders and Blasters are ranged archetypes. They rely on clever tactics to keep at a distance while firing at enemies and buffing themselves and allies.

Coming in the future are even more, new archetypes. The first ones to be added will be Controllers, who can stun and immobilize enemies, and Commanders, who control an entire squad of allies. Of course, if you have any suggestions about an archetype you’d like to play, we’d love to hear it! We always enjoy hearing back from our community.